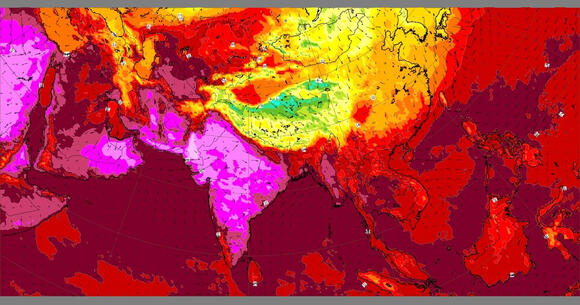 The phenomenon brings temperatures up to 47°C and the World Meteorological Organization (WMO) warned Friday that it will affect the health of millions of people.

To that the UN agency also added water and energy supplies.

But according to WMO spokesperson Clare Nullis, the heat wave may also have negative consequences for agriculture "at a time when the world is under enormous pressure in terms of food security".

She stressed the unusual nature of this wave, in an area where such phenomena are more likely to occur in May.

The WMO forecasts that the heat wave will intensify over the weekend and will not subside for about seven days.

Nullis warned that the current temperatures in the region, between four and five degrees above the usual values for the season, could have a special impact on mountain areas due to the possibility of torrential floods as a result of the melting of some glaciers.

Some of India's main urban centers, such as its capital, New Delhi, have already recorded above 43 degrees, according to the national meteorological department, which has placed the country under alert over the weekend for extreme temperatures.

Neighboring Pakistan has seen temperatures above 47 degrees, the highest in the northern hemisphere so far this year, though still a far cry from the 50.3 degrees recorded in the Pakistani city of Turbat in May 2017, the fourth-highest temperature in history.

Nullis said it is too early to point to climate change as directly responsible for this heat wave, but admitted that it fits within the effects expected by the organization according to previous analysis.

"The Intergovernmental Panel on Climate Change (IPCC) indicated in recent reports that heat waves would be more intense and frequent in South Asia," she said.