I write about things that interest me in hopes that it also interests you.

The Bay Area: My Favorite Omakase 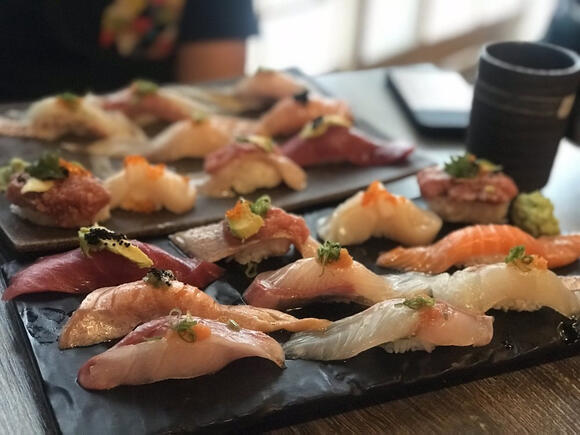 If you’re a follower or you’ve simply read a few of my articles, you’ll notice that a common theme of mine is the lack of food variety while growing up. I was never fond of fish as a child because of bones. When I grew up, I never ate sushi because, well, it was expensive and we didn’t grow up with a lot of money, as I’ve said before, so eating raw, fancy fish was pretty much out of the question.

My first run-in with “sushi” didn’t happen until I went off to college. You’ll notice I placed sushi in quotes because...and I’m ashamed to admit it...but my first sushi was a pack of California Rolls from Safeway, the grocery store. Sad, I know, but I’ll just tell you this: it was delicious. At the time and for a poor college student living off $3,000 per semester.

No, but seriously, my first experience of sushi was at a restaurant in Palo Alto, CA that I don’t even remember the name of. I remember thinking it was decent and not like anything I’ve had before. Since then, I’ve had the pleasure of eating at different sushi restaurants in California across the Bay Area to a few places in Seattle, WA. My wife and I normally throw in a visit to a sushi restaurant whenever we go on vacation so we’ve tried a few places in Vancouver, BC and at least one place in Virginia Beach, VA.

Throughout all these places, my palate has gone from eating partially cooked sushi such as California Rolls with real crab (not from Safeway!) and crazy, saucy rolls with even crazier names to fully raw rolls. Over time, I’ve learned to love the natural flavors of raw fish. Then, I discovered nigiri. The simple, yet elegant mixture of raw fish over a small ball of rice was the perfect balance!

My first nigiri was an order of Blue Fin Otoro. If you know, you know. And I know, this was the worst and best first nigiri decision. Nothing after this tasted the same. I was hooked on nigiri and always ordered it whenever we ate sushi.

Then, the day came where I was brave enough to order something off the paper menu and on the menu on the wall. Something called “omakase”. Of course, I asked what it was, shyly because I didn’t want anyone to know that I didn’t know. For anyone who doesn’t already know, omakase is normally referred to as chef’s choice. This meant you would get an order of 8-10 pieces of nigiri, all hand picked by the head chef. Normally, it has almost every fish that’s on the menu with the occasional eel, sea cucumber, or masago.

In my experience, omakase normally consists of the best cuts. You could get a few lean salmon cuts as starters, with some fattier tuna or salmon cuts that practically melts in your mouth. Sometimes, there’d be seared baby lobster, which is bomb! But the real star? Wasabi. And I don’t mean the wasabi that comes with the table. I mean, real wasabi, ground by the restaurant staff just moments before. This. Stuff. Is. Gold.

For anyone who has never had real wasabi, I highly suggest going to try it. You’ll notice the difference right away. Real wasabi has a much, much better flavor and highly accentuates the sushi you’re eating. I normally only eat real wasabi with nigiri sushi or sashimi, because any other roll just isn’t worth it.

You also have to be very selective of where you eat real wasabi. I’ve been to a few restaurants and the delivery of it just isn’t the same. Sometimes, it’s too pasty. Other times, it’s finely cut and not ground. Now, this could be a personal preference, but I definitely prefer and highly recommend ground real wasabi. Though, I do admit that I just love wasabi in general and have eaten it no matter how it’s delivered.

But boolsis, I thought you don’t eat spicy foods? Yes, I know. However, I’ll make the occasional exception. Especially for wasabi. Know why? Because if I eat too much of it, I can drink water and the spice is gone! Seriously! That’s what I love about it. There’s an immediate brake to this spiciness.

The best wasabi and omakase that I’ve had, though? It’s definitely from a restaurant called Amami Sushi. Before I link out to where it is, a brief history for context: I first discovered this place in San Bruno, CA with my wife. This restaurant was decent sized but the parking lot was very, very small. And I remember the restaurant would get pretty busy. Honestly, I can count on one hand the number of times we went before they expanded. My wife and I rediscovered their delicious foods when they opened up more restaurants.

To date, we know of four restaurants that carry the “Amami” namebrand. All but three, I believe, are owned by the original chef. However, our favorite place to eat at is Amami San Sushi in South San Francisco, CA. This place is normally pretty busy but always, always delicious. Especially when their head chef is the one preparing!

We have yet to be disappointed with the omakase from this place. The fish selection is superb and the wasabi (I know, you’re tired of hearing about wasabi) is phenomenal. The fish cut is always perfectly balanced with the amount of rice that you get. There’s never too much or too little. Occasionally, the omakase consists of salmon, tuna, baby lobster, and a few other selections. My favorites are the fatty tuna and baby lobster. Both of these are buttery in their own ways! Sometimes, the salmon is just as buttery but it depends on the chef’s decision that day. Ah, I can already taste the fish as I’m writing this. In fact, I might drop in tomorrow for lunch!

If you happen to be in the area, I highly recommend dropping in for a bite!

I write about things that interest me in hopes that it also interests you.

Without financial knowledge growing up, I must admit it was difficult at first to really think about retirement. Eventually, I realized that if I didn’t want to work myself to death I would have to start thinking about my finances and where I’m eventually headed. Sadly, this realization came later than I’d hope when I was already in my 30s. Still, I won’t admit defeat and will work even harder to make sure I can retire. Early if I can.

No, seriously. You should be tracking where every single cent is going. I didn’t grow up with money. My parents emigrated from Southeast Asia to America as teenagers to different parts of California and eventually met in Fresno where they married. Growing up, we struggled. My father had to work two jobs while attending college in order to provide for us. We lived off big blocks of cheese and Kix cereal where the occasional McDonald’s visit was a miracle. Yet, I never felt the struggle. I never felt the pinch. For that, I’m super grateful to my parents. But, what that did was leave me without a strong understanding of money.

Growth Marketing with CXL - Week 8: My Approach to Research and Testing In The Past

Research and testing is a vital part of any conversion cycle, as discussed by Peep Laja, founder of CXL. In this week’s article, I wanted to take a moment to relate it to my professional experiences since my company’s website, and my products to some extent, are still pretty new so I haven’t reached a point where I would like to start testing. Of course, I’m hoping that will change in the next couple of months! So, if you’d like to follow along, please check out 8ight5ive Games’ website and sign up to be a part of our mailing list!

You’ve done it. I’ve done it. We’ve all done it. A quick Google search will result in various articles urging you to save money, create a budget, and have a backup plan. However, I think it’s pretty safe to say saving money is relatively difficult. And for good reason.

Rasoi's Butter ChickenBorrowed from Restaurant's Yelp page. Growing up in Fresno, CA with a very big extended family meant I was mostly eating home-cooked meals or y’know...extended home-cooked meals. This meant, my exposure to Indian food during my early years was very, very limited. In fact, I can’t remember a single time I actually ate Indian food when I was still living in Fresno. It wasn’t until I grew up and came to the Bay Area for college that I started venturing out.

My favorite Japanese curry was a discovery during my college years. While living in Daly City, CA and attending the Art Institute of California in downtown San Francisco, I would occasionally spend my weekends hanging out with my roommate in the Westlake Shopping Center off of John Daly Boulevard.

Sophia Eng gives a deep dive into tracking key performance indicators and utilizing particular channel-specific strategies. This was another really interesting topic for me as I went through Sophia Eng’s lessons on identifying and amplifying growth channels. Eng is a Digital Marketing Strategist at InVision App where she designs and delivers global content strategies, tactics, and channel distribution plans for billion-dollar brands, startups, small/midsized, and large enterprise businesses across various B2C and B2B spaces.

Relating my own discoveries and implementations to Sophia Eng’s strategies from her lesson in CXL Institute. Last week, I went over various channels that Sophia Eng, a Digital Marketing Strategist at InVision App, suggested as good starting points for digital marketers. For this particular article, I’m hoping to discuss her strategies further as it relates to how I’ve utilized it or, for any strategies that I’ve yet to implement, how I plan to do so.

With only six more weeks to go, I wanted to take the time to reflect on what I’ve learned thus far with CLX in their Growth Marketing minidegree. It has been roughly six weeks since I started the minidegree program with CXL Institute focusing on growth marketing. For anyone who is unaware, CXL is an online organization that makes knowledge accessible for anyone willing to put in the effort to learn.

Continuing my lesson with Paul Boag as he explains the importance of user-centric marketing. Thanks again for joining me this week as I continued my lesson with Paul Boag. If you didn’t get a chance to read through my first article with his lesson, please feel free to do so here. If you’re new here, this article is week 4 of a series of 12 where I’ll be documenting my journey across CXL Institute’s Growth Marketing Specialist minidegree. You can check out the other articles I’ve written on my profile.

I've been in the San Francisco Bay Area for about 16 years now. In that time, I've never truly found egg rolls that hit the spot. Egg rolls that reminded me of home. That has finally changed!

3 Methods For Paying Down Debt

Learning about and following these methods helped my net worth hit new highs. When I was still living in Fresno and attending Fresno City College, I was pretty consistent with credit card payments and rarely spent money. I didn’t check my credit or even fully understand what credit meant at the time, yet I guess I had really good credit. I continually received credit limit increases and never had an overdraft despite rarely having more than a few hundred dollars at any given time, most of which came from my job where I fixed ATMs.