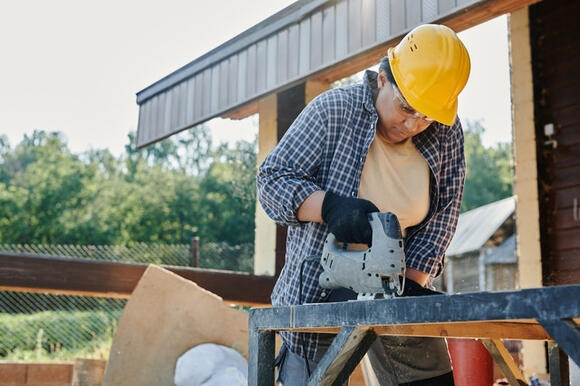 If you’re willing to put in a little “sweat equity,” you could soon be a first-time homeowner at a price you can afford. That’s the mission of nonprofit housing organization Habitat for Humanity International.

Habitat for Humanity recently held a wall-raising event in Charlotte, North Carolina to celebrate the first of 350 homes to be built or renovated nationwide. The soon-to-be homeowners are a family of six from the Thomasboro-Hoskins neighborhood of Charlotte.

They were joined by 15 employees from Wells Fargo who volunteered their time and effort to help the family raise the walls on their new affordable home. Wells Fargo provided a $130,000 grant to Habitat for Humanity of the Charlotte Region to build the home. This also included funds to renovate an already existing home in the community that needed critical repairs for it to remain habitable.

This isn’t the first time Wells Fargo has partnered with Habitat for Humanity. The multinational financial services company has collaborated with Habitat for Humanity since 2010. They’ve donated over $119 million to Habitat and its affiliates. This money has gone toward new home construction, neighborhood revitalization, disaster response repairs, and helping seniors age in their homes.

In 2021, the Wells Fargo Builds Program provided funding to help families repair, rehabilitate, or build 386 homes across the United States. Over the years, the program has helped 1,285 people, which includes veterans, older Americans, and 395 first-time homeowners. For 2022, the company has pledged $7.75 million in grants to assist Habitat for Humanity to expand the number of affordable homes in 200 U.S. communities.

How Habitat for Humanity works

In 1976, Millard and Linda Fuller founded Habitat for Humanity in Americus, Georgia. The nonprofit embraces the principles of partnership housing. This means that Habitat homeowners help build their own homes with the help of volunteers.

They also receive affordable mortgages that will eventually allow them to own their homes outright. The goal is to help families achieve the American dream of homeownership, along with teaching them the skills needed to ensure self-reliance and create better lives for themselves.

Habitat has helped over 39 million people in the United States and in over 70 countries. In April 2022, the organization announced they were helping Ukrainian refugees by securing temporary hotel accommodations and providing emergency travel kits. In March 2022, American philanthropist MacKenzie Scott donated $436 million to Habitat for Humanity International and 84 U.S. Habitat affiliate organizations.

The application process to become a Habitat for Humanity homeowner requires individuals to dedicate time and hard work. Through the program, the individual will learn about the responsibilities of homeownership, personal finances, home maintenance and upkeep, and mortgages.

This process helps homeowners learn the skills needed to ensure their long-term success. If you’re interested in applying for a house, go to Habitat for Humanity for more details.

What do you think about Habitat for Humanity’s work to help solve the affordable housing crisis?

Let us know your thoughts in the comments section. And please share this article and follow us. Your support helps us distribute our work to a wider audience. Thanks so much!