Is Today The Bidet?

What if you found out there's a secret hygeine product that all the elites use every day? Would you want one?

Let's pretend no one wants to talk about this product despite the fact it solves a handful of problems with simple common sense. Let's also say that it solves one major source of anxiety we got introduced to during the 2020 Covid-19 pandemic.

In addition, this product matches the demographic of the hygeine-obsessed American consumer perfectly. Looking into the future, this product is a solution for the aging generation of baby-boomers. It also would be a godsend for anyone with mobility issues that has difficulty with a normal everyday bathroom routine.

You'd think that would be a very popular product, right? As American as apple pie, and instagram?

Unfortuntately, this product remains unmentionable in America. It's so taboo, you'd think it's illegal.

Yes, Americans are innovative, inventive, and ingenious. We lead the free world in cultural advancement. We have the best tech and minds on the planet.

Yet we wipe our American butts with underperforming wads of paper. And then we panic when stores run out of paper! Oh me, oh my. What to do?!?

As we march into the future, many innovations and inventionsn will change our everyday lives.

The tech world will surely introduce game changing products in the field of artificial intelligence (AI), blockchain, and internet of things (IoT). But today, we're talking about an invention that's hundreds of years old. In addition, the only intelligence required is regular common sense, and simply plumbing.

Consider this article a guidebook for all things bidet related. To clarify, we'll bravely attempt to answer all the standard, unmentionable, bidet FAQs:

In short, we'll try to learn everything we need to know about the wild world of bathroom plumbing. Ready? Grab your butt and let's go!

How do you Pronouce The Word Bidet?

Bidet is pronounced Bih-day in the Queen's English. Which if you ask me sets it up perfectly for a solid dad-joke of a b-day present (in addition to all the features and benefits we'll discuss below).

A Brief History of the Bidet

According to a 2018 Atlantic article, bidet's first came into use in 17th century France. Bidets were then adopted by the Italians and others. The Brits did not follow suit. Thus, one hypothesis for American's lack of bidet adoption stems back to our pre-Revolution relationship with England. 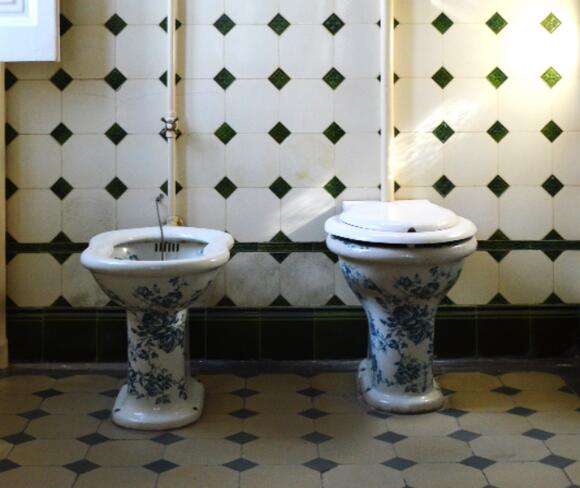 Photo by Renee Verberne on Unsplash

For a long time, bidets they existed basically as a second unit that sits next to the toilet. Despite the inefficiency of having two bowls, by the mid-1900s, in-home bidets began popping up in the newly designed suburbs across America.

But while bidets went mainstream in other countries like Japan, they just never caught on with mainstream America. Why is that?

Space is an issue. Not every home has room, or the plumbing set up, for a second bowl.

Further, many of those mid-century suburban, tract homes were built as cheaply and quickly as possible. In other words, skip the bidet.

Price could be one reason. Bidets use to cost hundreds of dollars. Now, you can find a highly rated bidet that attaches to you toilet seat for less than $50.

Beyond all that, bidets have a marketing problem. Butts are a touchy subject.

Why are bidets taboo in America?

The Atlantic article suggests bidets are taboo more or less because of America's puritanical roots. In short, the potty is a taboo subject that America doesn't really discuss.

I get it. We all poop, but we all want to pretend like we don't.

I know you don't poop, but if you ever did just know bidets improve the clean-up process on aisle one.

What the heck are fatbergs?!

Beyond that, let's get real for a moment, there is a threat to municipalities sewage infrastructure. They're called fatbergs. Fatbergs are like icebergs that backup the flow of liquid. Except fatbergs are made of fat, grease and unflushable items (namely, wet wipes).

Bidets eliminate the need for wet wipes. So in other words, there's really no rational explanation why bidets aren't widely used in America and worldwide on every toilet. They used to be expensive, but now bidets are under $50. So we go back to the marketing problem.

Should I get a bidet?

Yes, and so should your friends. Put another way, what do you get the girl with everything? How about fresh butt?

Beyond that, who remembers the Great Toilet Paper Panic of 2020? I do. And let me tell you, I've never been stricken with a greater sense of FOMO than when faced with barren shelves in the TP aisle. Do you really want to go through that again? I don't!

All of which says nothing of the actual features of a bidet. With a brief blast of water, bidet users get improved cleanliness, better hygeine, and help dealing with hemmroids and other downunder issues.

In short, bidets make common sense. As one bidet manufacturer puts it, "If a bird pooped on you, would you wipe it off? No, you'd wash it off."

Where can I find a bidet? Are they expensive?

The great TP Panic of 2020 came rushing back to me recently.

I was walking down the toilet seat aisle of my local bigbox hardware store looking for a new lid. Then I saw the bidets. Then I saw the $40 price tag! Then I put one in my shopping cart.

I also did an internet search and found many highly reviewed, inexpensive bidet varieties. There are actually many price ranges and options available. Some include options like warm water and deoderizer. I opted for the entry model, with the rock bottom price.

I've had my bidet installed and running for almost a month now with no issues whatsoever.

Are bidets difficult to install on my toilet?

No. The only issue I ran into is that I had to buy a shorter hose from the water supply to the tank.

Everything else about the installation went smooth. Here's some more tips:

Ok first of all, I'll keep it clean. Which will be easy, because that's the bottom line. Clean.

Take your typical number two experience. Then turn on your bidet for about 10-15 seconds. And afterwards, to put this succintly, the toilet paper will merely be there for drying off because your butt will be clean.

As mentioned, our bidet uses cold water, so that provides a little initial shock. But there's nothing painful about the bidet experience. In fact, if you've ever had to use the sandpaper variety of toilet paper, a bidet is actually much less of a pain in the butt!

When you consider how affordable and easy-to-install bidets have become they just make sense.

When you consider that they end the anxiety and FOMO of the next toilet paper shortage-- they're a no brainer!

In short, after you install that bidet, you'll probably wonder why you waited and didn't get one sooner. Thus in the final analysis, perhaps bidets should be mailed out with the stimulus checks!

3 Ways You Could've Won Tickets To The MLB 'Field Of Dreams' Game, But Probably Didn't

(Dyersville, IA)-- Much anticipation and mystery surrounds MLB's first game in the state of Iowa. After getting canceled due to the pandemic in 2020, the Field Of Dreams game is set to be played on August 12th, 2021. But no one knows if they'll be attending yet!

ICYMI- It's a boomtown for the Essential Oil industry right now. According to a study by Grandview Research, the essential oil market totaled $4.8 Billion in 2019. And it's forecasted to reach $7.3 Billion in revenue by 2024. My family will be contributing to that figure.

Cold Feet? Tricks To Warm-Up Your Freezing Toes This Winter

It happens every winter. Your body is nice and warm under the cozy covers, but your feet are freezing! And worse, it's keeping you awake. According to many health professionals, cold feet may be a sign of poor circulation, diabetes, or anxiety.

Was Mark Buehrle One Of The Best Pitchers In Major League Baseball History? The Answer Might Surprise You

As MLB fans track the 2021 candidates, there's a debate surrounding Mark Buehrle. Does he deserve to be in the Major League Baseball Hall Of Fame? Specifically, the debate over Buehrle's HOF worthiness centers on two simple questions:

New Twist On An Old Scam Targets You And Your Employer

News reports have kept us informed over the years about the FBI's efforts to combat internet scams. Add a new one to the list. Here I outline the new twist on an old scam that fraudsters used to target me. Thankfully I caught on before it was too late. But believe me, someone put in a disturbing amount of thought into this scam.

I Think I Know Where Its 'Soul' Came From

Pixar's 'Soul' has a lot of ambition. Unfortunately, it's been bet by a bit of controversy. (Image credit to Pixar/ Disney) A lot of people love 'Soul.' Others called it racist. Tina Fey's portrayal of Joe Gardner (voiced mostly by Oscar-winner Jamie Foxx) has been described as black face.

Uncover The Truth About 'California Stars'

Is 'The Mandalorian' A Star Wars Parable About Modern Fatherhood?

You and I aren’t the only ones who fell in love with Grogu. It’s obvious Mando himself fell in love with the child. Did you notice that as the relationship between Mando and Grogu evolved, it seemed to get more real?

One Mark Hamill Tweet Revealed The Future Of Star Wars

"There is something with storytelling where you take the most mundane and elevate it. And if you're taking something that's really elevated, you bring it down to the grit of it." - Jon Favreau Disney Gallery: Connections.

Don't Be Afraid: The Stoic Advice In The Mandalorian And Book Of Luke

SPOILER ALERT-- Season two of Disney's The Mandalorian concludes with a tear-jerking exchange between Mando and The Child, Grogu. Luke Skywalker arrived on the scene after receiving Grogu's Force/ S.O.S. call. Luke saves the day by destroying a battalion of nearly invincible evil robots with a flurry of Jedi awesomeness.

5 Things Every White Sox Fan Should Know About Iowa

The movie Field of Dreams solidified the special bond between the state of Iowa and the game of baseball. Over the years, the Field of Dreams movie site in Dyersville, IA has become one of the Meccas of baseball. Indeed, anyone who’s been to the field will tell you it’s a magical, surreal place.

When Googie Architecture Was The Look Of Tomorrow

Between the late 1950’s and early 1960’s, Googie was the undisputed “look of tomorrow.”. While Kennedy spoke of Man going to the Moon, it was Googie-style architecture that made the Space Age come to life via cantilevered elements, parabolic boomerang shapes, bold colors and whiz-bang angles.

Blue Christmas? Why Blue LED Lights Are So Hard To Look At