We are all somewhat enchanted by the variegated aroid plant photos on social media these days. If you ever considered buying one, but do not know enough about them, you came to the right place.

If you have read my previous articles on Monsteras, you probably know that I am obsessed with them. And I am even more excited by the sight of a variegated one. However, a variegated Monstera is quite pricy these days. Before investing in one, here are 6 questions to ask to make sure you are getting your money's worth.

1. Variegation. What is it?

According to Wikipedia, Variegation is the appearance of differently colored zones in the leaves and sometimes the stems of plants. Variegated leaves rarely occur in nature.

Photo by Severin Candrian on Unsplash

The variegations observed on Monsteras are generally called "chimera variegation." It is caused by a genetic mutation. Plants show two different chromosomal makeup in a single plant, where some tissue can produce chlorophyll and others cannot. The result is a plant with white or yellow zones intermixed with the solid green form.

Usually, chimera variegation on Monsteras is randomly spread out around the plant. This is why you can observe leaves with different degrees of variegations, such as a splattered pattern, a half-moon, or an entirely white leaf.

2. Do variegated Monsteras grow the same as the common ones?

3. Is the variegations on Monstera stable?

Like the last paragraph suggested, variegations on Monstera leaves are typically a random expression of the mutated genes. The patterns on each Monstera leaf on the SAME plant are subject to change depending on the plants' condition and other random factors.

Know that these "patterns" are just random genetic expressions on the leaves, and the new leaves may or may not have the same pattern.

On the other hand, the variegated part lacks chlorophyll. As a result, heavily variegated leaves cannot photosynthesize as efficiently as green leaves. And because of this, when enduring a low light situation, Variegated Monsteras sometimes tend to "revert", A.K.A start to produce less variegated and more green leaves to survive.

So if you put a variegated Monstera under insufficient lighting, it might produce less and less variegated leaves. Eventually, it could revert to a regular green Monstera.

4. How many different kinds of variegated forms of Monsteras are there?

It could feel disorienting when bombarded by different names of the variegated Monsteras "for sale" online (like Thai Constellation, Mint, Marmorata/Aurea, Half Moon, etc.). And it is even more confusing when you see that they all have a slightly different price tag attached.

Screenshot of search result of "Monstera Borsigiana Albo-Variegata" on Etsy.com

Then what are these confusing names and their price tags online?

Well, plants that variegate in spots and speckles have acquired the trade name 'Thai Constellation'.

Plants with more stripy variegation patterns are called 'Mint'. A few years ago, 'Mint' became the 'new thing'. Some sellers tried to pass them off as a different type of variegated Monstera and charge for more. However, it is really just a variegated Monstera that happens to express its genetics differently. It is not guaranteed to produce the same pattern in its new leaves.

A variegated Monstera that could be named "Mint". Photo credit to NSE Tropicals.

In the end, only "albo” and "aurea" are scientifically accepted "cultivars" for Monstera variegations. So don't be fooled by the cute trade names and spend more than you should.

5. How do you grow variegated Monsteras?

Monstera variegations CANNOT be carried over by seeds. As a genetic mutation, it happens very rarely in the wild. And the variegated Monsteras we see today are more or less produced from "cuttings" from very few mutated mother plants.

6. Why are the variegated Monsteras so expensive?

Because Monstera variegations are a rare form of unstable mutation, their scarcity makes them expensive. Today, an unrooted cutting of an Albo-variegated Monstera with two leaves and a node can sell up to $100 - $500. An Aurea-variegated Monstera plant, on the other hand, is typically worth more than $1000. And just a small unrooted node of such a plant is worth more than $500. 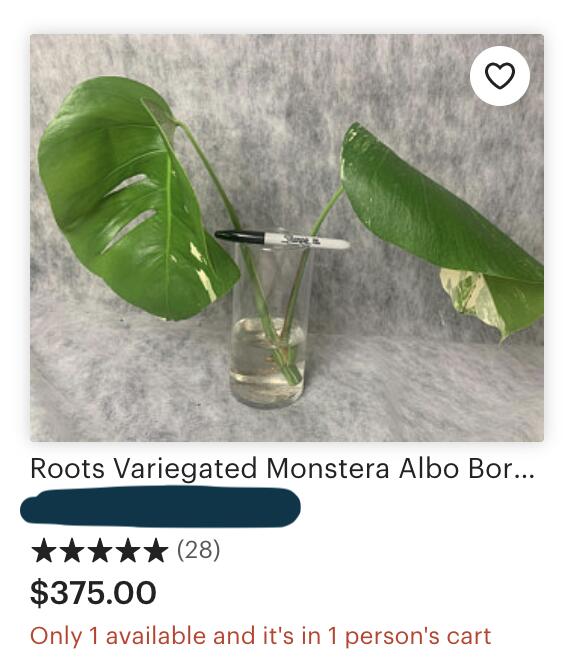 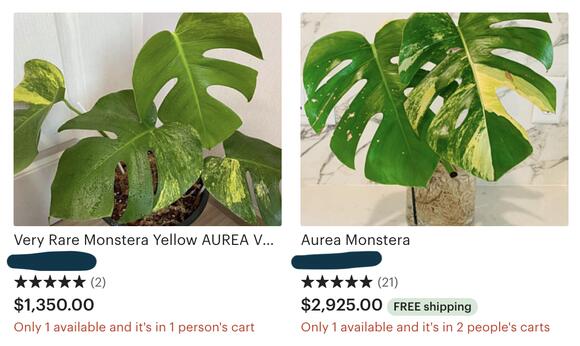 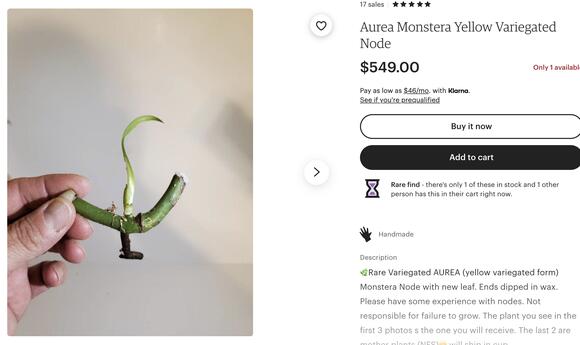 A series of screenshots from Etsy.com

All I can say is, it is not uncommon that sellers boost up the price just because they can. It is entirely up to you to decide whether those variegated Monsteras are worth that much money to you, personally.

What do you think of these variegated Monsteras? Would you consider buying one?