Exploring the hidden gems throughout the state of Michigan. The underrated places, amazing people, and unique products that are found throughout our great state.

Spend the Day on Eight Point Lake in Clare Michigan 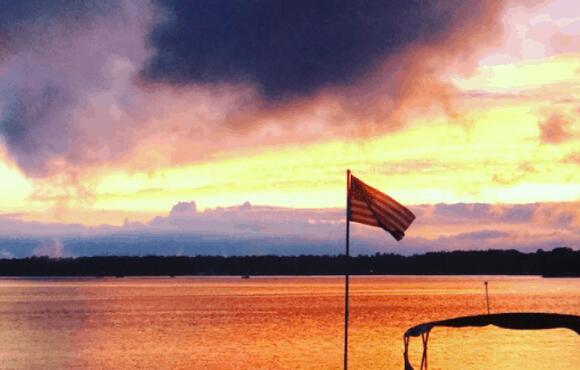 Michigan may be famous for its Great Lakes, but far too often, people overlook its sparkling inland lakes that are perfect for fishing, water sports and simply splashing around. One of the most spectacular lakes in Michigan is Eight Point Lake, which is a large inland lake located in Clare County.

Eight Point Lake in Clare should be at the top of your MI bucket list because it is an all-purpose lake that has opportunities for people of all ages and of all skill levels. Whether you want to spend the day cruising around on your speed boat, or you prefer to spend hours floating on a fishing boat with your reel in the water, you will find that this is an idyllic place to spend a perfect summer day in Michigan.

Another reason that families love to head to this lake is that it’s a shallow lake. With a depth of about 25 feet throughout the entire lake, this lake is able to accommodate a variety of boat sizes all while maintaining a comfortable water temperature during the summer months. The warm waters make it a favorite among swimmers!

For decades, Eight Point Lake was a private lake that only residents who owned property on the lakeshore were able to use. However, the state of Michigan purchased the lake in 2008, and by 2009, a public boat launch was installed that opened the lake to everyone. This means that summer weekends are busier than they used to be and that boat traffic has increased, but it’s still a relatively peaceful lake.

If you drop a line into Eight Point Lake, there’s a good chance that a fish will bite. A recent assessment of the types of fish that live in this lake revealed that more than 16 species of fish call it home. Bluegill are particularly abundant in this lake, and there is also a large population of smallmouth bass. Some of the other species that live in the lake — but whose populations are not as large — include crappie, walleye, and largemouth bass.

More Things To Do In Clare Michigan

While it’s hard to tear yourself away from the beauty of this lake, you may want to take at least a few hours to explore historic downtown Clare. The downtown area is filled with quaint and charming buildings that would remind you of an era gone by. As you visit the boutique shops and check out the restaurant menus, you won’t want to forget to stop by Cops & Doughnuts — another essential summer bucket list MI destination.

Cops & Doughnuts is a bakery shop known for its homemade doughnuts and other delicious confections. The bakery itself has been in operation since 1896, making it an iconic site in the community of Clare. It was beloved by local residents and visitors alike, and there was a huge outcry when the bakery was almost closed. Rather than see this crucial community business go under, nine police officers from the Clare Police Department decided to take over the running of the business.

In order to pay respect to their origins and to promote the important role that police officers play in the community, the officers transformed their new bakery into an innovative space that played on the age-old stereotype that cops love doughnuts. Visitors to the bakery today will be delighted by the police-themed decor and the variety of doughnuts that are available to them.

While the bakery may have been operating in Clare since the late 19th century, there are other restaurants in Clare that also have become part of the fabric of the community. Whitehouse is a casual diner that has been a favorite among Clare locals since 1935. Stop here for a hearty breakfast before you spend your day fishing on Eight Point Lake, or head there for a burger and a bowl of homemade soup after a day in the sun.

Exploring the hidden gems throughout the state of Michigan. The underrated places, amazing people, and unique products that are found throughout our great state.

I recently took a trip to visit friends that live by the mountains and I remember sitting in awe as they discussed the laundry list of options for our impending morning hike; there were so many fabulous routes to choose from! To properly compete, I figured I needed to make a laundry list of my own of the best hiking trails Kalamazoo boasts.

Where to Find the Best Fall Colors in Marquette Michigan

If you plan on being in West Michigan this fall, make sure you visit one of these amazingWest Michigan apple orchards and cider mills. VerHage’s Fruit Farms and Cider Mill | photo via @tris10mabin.

About 35 minutes west of Oscoda, near Lake Huron, you’ll find the community of Hale within Plainfield Township, Michigan. Despite its small size, Hale offers a lot of great opportunities to enjoy delicious food and recreational activities. In fact, there are numerous streams, ponds, and lakes in the surrounding area that you’ll want to explore on during your #MIAwesomeList day trip to this region.

Looking for a perfect unplugged summer vacation location for the family? Clear Lake State Park is the ideal place to stay. The lake is extremely clear and absolutely gorgeous. There is no need for any electronics while you are here as there are plenty of fun outdoor activities to enjoy during your stay.

While you are en route during your summer Michigan road trip adventure, you will likely spot barns of all shapes and sizes along Michigan’s scenic country highways. When you reach Ogemaw County, you will start to see that some of these barns have colorful squares adorning their faces – and your eyes are not deceiving you, they do look surprisingly similar to quilt squares.

There’s nothing quite like summer in northern Michigan, and you will want to take advantage of the opportunity to have fun outdoors while staying in Grayling. The disc golf course at Hanson Hills is one of the best things to do Grayling MI, as it offers opportunities for players of all skill levels as well as plenty of fun for the whole family.

The first quilt trail in Michigan, the Alcona County Quilt Trail is a series of large painted wooden quilt blocks that are mounted on or next to various structures throughout the county. Some of these structures include historic barns, churches, and a train depot. The 8-foot-by-8-foot wooden quilt squares can be found at parks as well.

Step Back in History at Curwood Castle Park

About 40 minutes north of the Michigan capital of Lansing is the tiny town of Owosso, an unassuming city with blue-collar roots and a passion for protecting its past. Its charming downtown features a variety of architectural styles, from Queen Anne to Italianate, Victorian, and more. But one would not suspect that this quaint town in mid-Michigan is also home to a castle modeled after the Norman chateaus that can be found throughout France.

While most of the state parks in Michigan are large, spacious plots of land that offer recreational opportunities and wildlife viewing, the Fred Meijer White Pine Trail State Park is a bit different. This park — which begins in Cadillac and ends in Comstock Park — is a linear park that spans more than 92 miles.

When it comes to summer MI things to do, being out on the water, is one of the top activities. A favorite place to go is the Muskegon River, where you can rent a raft or a canoe and enjoy a lazy day out in the sunshine floating along.

If you’re planning your summer vacation in mid-Michigan and want something fun to do, Anderson & Girls Orchard must be on your Michigan summer bucket list. This wonderful orchard and farm have been in operation since 1978. A petting zoo was added in 2000 and now has over 140 animals to visit while you are there.

DIY at The Mud Room in Grand Rapids

The concept of investing in an experience rather than simply purchasing a product is nothing new at The Mud Room in Grand Rapids. This DIY art studio has been offering local residents and visitors the opportunity to get colorful and creative since 1996. With ample opportunities for creating, designing, and painting as well as shelves for shopping, you can easily spend an entire day at this innovative space.

Get Back to Nature at Chipp-A-Waters Park

As well as being home to the bustling campus of Central Michigan University, Mount Pleasant Michigan has some wonderful outdoor recreation options to enjoy during the summer months. One of visitors’ and locals’ favorite things to do in Mt Pleasant Michigan is visiting Chipp-A-Waters Park, most of which rests on a state conservation area.

In mid-Michigan, the highlight of the summer is the Ionia County Free Fair. This annual event combines the bright lights of the midway with the thrill of agricultural competition while also mixing in food, music, friendship, and most of all, fun. Not only is it the best event of the summer for local residents in Ionia County, but it also attracts visitors from around the state who want to experience wholesome entertainment for the entire family.

There is nothing quite like summer in Michigan, and outdoor activities are abundant. If you are visiting Gratiot county, you must take the time to go to Lumberjacks and Rivermen’s Park just a short drive northwest of Alma. This fantastic park offers a view into the world of lumberjacks.

When checking things off your Michigan summer bucket list, there are many wonderful destinations and things to do. One relatively unknown location you might want to consider in the north-central part of the state is Wooden Shoe Village. This small community is located in Gladwin County, and while you won’t find much on a Google search of this area, there are several beautiful things to see and do in this hidden gem of a small town.

If you have spent any time traveling throughout Michigan, you know that people often use a few distinct phrases to describe where they are at in the state. Any town in the Lower Peninsula that is north of Zilwaukee Bridge is considered to be “Up North,” while any place located on the small peninsula in the Tri-Cities area is said to be part of “The Thumb.” Well, nestled in the heart of the Thumb region is one of the most unique state parks in Michigan. Sanilac Petroglyphs Historic State Park is one of the only places in the state where visitors can see ancient Native American stone carvings.

Go Back in Time at the Tahquamenon Logging Museum

Are you looking for a great thing to add to your summer bucket list and learn more about Michigan’s history? Explore the eastern Upper Peninsula and be sure to add the Tahquamenon Logging Museum to your list. The museum is located just north of Newberry and is a must-see.