Our mission is to inform the public on the most critical issues facing metro Atlanta by providing in-depth reporting and presenting possible solutions with opportunities for civic engagement online and in the community. 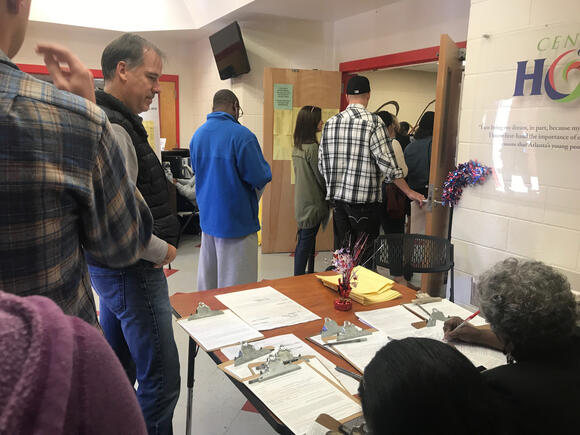 Their heightened anxiety follows two tumultuous years for poll workers and local election offices, who had to contend with a global COVID-19 outbreak, verbal and physical harassment, and a deluge of recounts, fueled by debunked vote-fraud claims over the 2020 presidential election.

The aftereffects of the state’s heavily contested 2020 election season, along with subsequent restrictive changes to Georgia election laws have made it much harder for local election offices to recruit poll workers, especially managers for polling locations.

The problem has reached  “a crisis point” for Douglas County election officials, the county’s election supervisor, Milton Kidd, told Atlanta Civic Circle. “We’ve had almost a complete turnover in our poll workers because of individuals not wanting to be involved in the electoral process,” he said. “So we’re going into a midterm [election] year with, basically, a brand new election staff.”

Kidd said about a third of his office’s permanent staff of seven have quit, and about 300 of the usual 300 to 400 seasonal poll workers used during the last two election cycles are not returning for the midterms. Half of the poll managers he’s relied on in previous elections are also gone.

What’s more, a bill fast-tracking through the state legislative session threatens to make his and other election officials’ jobs even harder, Kidd said.

If passed, HB 1464 would deputize the Georgia Bureau of Investigation as the first-responder for any allegations of election-related crime, empower the public to inspect paper ballots after elections and allow only the state election board, instead of counties, to accept private donations earmarked for election administration to distribute as it sees fit.

“All that has an effect on our poll worker recruitment and retention,” Kidd said.

Our mission is to inform the public on the most critical issues facing metro Atlanta by providing in-depth reporting and presenting possible solutions with opportunities for civic engagement online and in the community.

Voters cast their ballots at a polling precinct in Fulton CountyEmilia Weinrobe for Atlanta Civic Circle. Many of Georgia’s largest county election offices face a serious shortage of poll workers as they head into Election Day for Tuesday’s primary.

The State Elections Board on Tuesday voted unanimously to dismiss three ballot-fraud claims brought by right-wing activists–judging their allegation to be false that fraudulent actors illegally stuffed large batches of absentee ballots in drop boxes during the 2020 presidential election.

As housing affordability worsens, what will it take for Atlanta to better use residential space?

Sarah Kirsch, left, and Eugene Jones discuss the future of affordable housing police at an event hosted by WABE and Atlanta Civic Circle.Britton Edwards, Atlanta Civic Circle. As Atlanta Mayor Andre Dickens crosses his 100th day on the job, some top city officials will be headed back to the job market. But Atlanta Housing CEO Eugene Jones said he’s confident he’ll be asked to stick around the city’s newly rejuvenated housing authority.

The federal government is not doing enough to protect election workers from a growing barrage of threats and intimidation, according to a recent national poll of local election officials.

Election workers on their own when facing threats, accusations of misconduct

At the Park Tavern location in Midtown on the corner of Monroe and Eighth St.Photo credit: Emilia Weinrobe. Early last year, Fulton County election officials dispatched a series of internal emails to top county executives asking for police protection for some election workers dealing with a barrage of threats and harassment sparked by the 2020 presidential election’s outcome.

Sean KeenanForest Cove has been falling apart for years. Forest Cove property owner Millennia Housing Management began meeting with the condemned complex’s tenants Wednesday about a relocation plan—but it may not succeed in moving all 211 households before the July 15 target date set by the Atlanta mayor’s office.

Participants at recent Veterans Organizing Institute retreat in Atlanta, Ga.Atlanta Civic Circle. After 20 years in the military organizing troops, Gloria Hamilton is now using her military training to get more involved in causes in her community – including the upcoming election.

Print Forest Cove has been falling apart for years.Sean Keenan. Forest Cove’s residents finally seem close to moving out of the Southside apartment complex that was condemned in December. Now, it’s up to city of Atlanta leaders and property owner Millennia Housing Management to make good on their promise to relocate the 211 households still living there by mid-July.

A statewide zoning bill that would have further encumbered local efforts to increase residential density failed to cross the finish line when the Georgia General Assembly wrapped up the legislative session on Monday.

Atlanta is “one city with one bright future,” Mayor Andre Dicken told the region’s top business leaders, lawmakers, and dignitaries Monday at his first State of the City address.

Broken and boarded-up windows are a common sight at Forest Cove.Sean Keenan. The 211 households living in squalor at southside Atlanta’s condemned Forest Cove apartments could be moved out by July 15, thanks to a deal orchestrated this week by Mayor Andre Dickens’ office and the property owner, Millennia Housing Management, city officials told Atlanta Civic Circle Thursday.

Fulton County elections director Rick BarronAtlanta Civic Circle. Rick Barron is leaving the building – but not before he gets a few things off of his chest. After nine years heading Georgia’s largest elections operation, Barron has weathered enough criticism, controversy, and procedural changes to give him a full, unvarnished understanding of the political landscape.

Atlanta Housing signs off on plan for nearly 1,000 affordable units in FY 2023

An architectural rendering of the Trust at East Lake.Atlanta Land Trust. A two-acre land donation from the CF Foundation positions the Atlanta Land Trust (ALT) to build 40 townhomes for purchase — half deemed affordable for moderate-income Atlantans — in East Lake.

The federal census shows Georgia is more ethnically and racially diverse than a decade ago.Photo by Enayet Raheem, Unsplash. The U.S. Census Bureau undercounted Blacks, Latinos, and Native Americans for the 2020 census, new government data shows – an omission likely to affect political representation and federal funding for minority communities for years to come.

Where Perry Homes used to be, before its 1999 demolition.Google Maps. Atlanta Housing (AH) leaders on Wednesday voted to add homeownership units to the development plan for the former Perry Homes site and two neighboring Westside properties, earmarking almost a third as affordable.