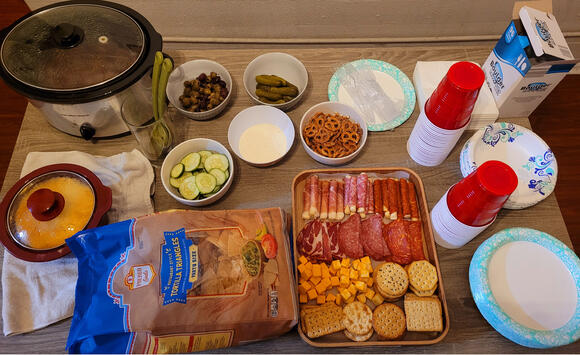 So, Jack and I had a party (yes, I know but we were careful) and I decided I wanted to make a charcuterie board for the party. As well as a spread of treats.

Well, they are usually about $150 if you’re going for the high-end brands. But there’s a way to make a lovely tray without spending so much.

That store with the 25 cent cart, Aldi.

My board wasn’t as intricate as the ones you see on Pinterest, but my friends loved it. I want to try different kinds of boards in the future.

Of course, a well known element of a charcuterie board is cured meat. I chose salami, prosciutto, and speck. These were all $3.99 per pack and delicious.

There are other meats you can try. I also found the same meats wrapped around mozzarella sticks. They were only $5 and looked fancy, so I added them to the tray.

I folded them and placed them in a neat row and added the cheese.

I’m not a cheese expert but I know what I like. To make the cheese more simple, I got two kinds of cheese cubes.

Both by Happy Farms, I used colby jack and cheddar and lined them next to the meat in two piles. While I could’ve opted for a block of cheese, I figured it would be easier for people to grab.

Plus, who could resist cheese shaped like a cube?

I took the easy way out and bought a box of assorted crackers. I would say the box cost around $1.50. It had six different types of crackers and they were all yummy.

At this point, we are at $33.50 on just the board itself. I haven’t forgotten the veggies and dip.

I couldn’t rely on savory meats and cheeses to keep my guests satisfied. But I didn’t want to do some boring veggie tray. So, I found some assorted olives that looked really good.

Then I got some baby dill pickles because everyone loves something crunchy.

One more thing I did was get a cucumber and sliced it into chips. Then, I took some rice vinegar and pink himalayan salt and put the cucumber slices in a bowl. Next, I put the bowl in the fridge covered until an hour before the party.

I drained the cucumber before serving. It’s a lighter flavor than dill pickles but refreshing too.

I had to make something nice and warm for everyone to enjoy. So I went back into my childhood and pulled out two simple recipes my mother used to make for parties.

I put frozen meatballs in the slow cooker with some bbq sauce and some grape jelly. I don’t know why my mother made them that way but it definitely adds to the sauce.

For the cheese dip, I added Veleda cheese and Rotello. My mother always used ground beef in hers. Instead I used ground chicken to give it a different flavor.

My friends went crazy for the cheese dip and the meatballs were almost gone before I got a chance to have one.

I also added some hummus and pretzels for an added touch. Everything in total was $50.00. It was a big hit with the guest.

I hope to do a more spring/summer time spread for daytime parties. Maybe something with more fruits and sweet pastries. Because I need an excuse to have mimosas with friends.

What other places sell great party snacks? Can you do it better for less? Comment below.

The Places I Used To Go In Atlanta Before COVID

Yesterday was my boyfriend’s birthday. Last year, before the pandemic reached its peak, we had a party. It made me think about all the other birthdays before 2020. Is it me, or is anyone else feeling nostalgic about life before COVID-19?