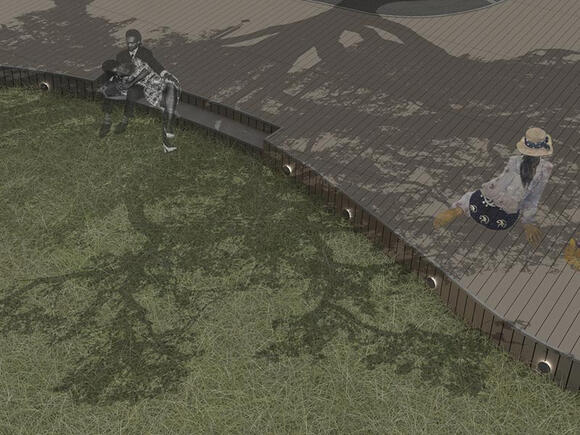 NEW ORLEANS, LA — City Park’s famed Singing Oak is getting closer to having its surroundings improved and, more critically, its roots guarded. If the project succeeds, Théa Spring, who recently obtained her master’s degree from the Tulane University School of Architecture, will receive a lot of credit.

Recently, Spring was selected as the winner of a competition launched by the Albert & Tina Small Center for Collaborative Design as part of its annual call for design schemes from local nonprofits. Concerned about the tree’s future, City Park is looking for ideas on how to satisfy the needs of the ancient oak while still giving an attractive gatherings spot.

“When we were evaluating the designs, we had to consider fundraising, day-to-day maintenance, and how it would serve the community programmatically,” said Casie Duplechain, chief development officer for City Park.

She said “Mindful Shadow” covered all the requirements and is the most feasible suggestion, assuming funding and inclusion in City Park’s master plan.

The oak is one of the most popular and soothing gathering spots in the park, located on the shore of Big Lake near the intersection of Wisner Boulevard and Lelong Drive.

Every breeze rings a pentatonic (five notes per octave) scale from its wind chimes, one of which is 14 feet long. The tree is so popular with visitors that its exposed roots have been harmed due to its frequent use. Park officials believe that a sitting deck, such as the one in “Mindful Shadow”, could help protect the roots while also improving its beauty.

“It is a great honor to have won this competition for City Park,” Spring said. “Visitors have enjoyed the Singing Oak for decades and for all kinds of activities, from the active to the contemplative, from the social to the solitary, and from morning till night. The beauty of this competition was its modesty: design was needed to protect the tree’s roots, not redefine its surroundings. This was an evolution rather than a transformation.”

Mindful Shadow is based on the concept of a second shadow, but it’s actually a wooden deck constructed in wood tones that resembles the oak’s trunk. One side runs along with the grass for easy access, while the other side thickens to provide seating. Visitors can see through to the trunk’s base and its main roots thanks to a metal platform.

“The earth will be lightly illuminated to guide visitors, like a string a beads,” Spring said.

The project costs approximately $50,000, and Spring said she wants to be part of its development. “I look forward to continuing this collaboration until we make it a reality,” she said.

The Beauregard-Keyes House’s upcoming event: Soirée in the Vieux Carré

Four restaurants and cafes in Gretna

GRETNA, LA - Located on the west bank of the Mississippi River, Gretna is best known for its historic district. When you need a place to recharge from touring around Gretna's local attractions, visit one of these nearby spots to have a delightful lunch or a sip of iced coffee.

NEW ORLEANS, LA - Residents of New Orleans and its surrounding area have a long history with hurricanes and tropical storms. Louisiana State Museum captures the impact of hurricanes on the city and the resilience of the people through art exhibitions in The Presbytère.