Seattle Digital Artist Fewocious recently sold $3.1 million of sneakers- that can't be worn. Collaborating with design studio RTFKT, Fewocious created three designs with price tags of $3,000, $5,000, and $10,000. They sold out in only seven minutes.

And the sneakers can't be worn. How does that work? Let's take a quick look at the Non Fungible Tokens (NFT) market — where digital items are bought and sold. Last month, a digital piece called Everydays — The First 5000 Days by American artist Mike Winkelmann, known as Beeple, sold for $69.4 million.

It doesn't exist in physical form — it is essentially a jpg file.

In February, Beeple sold a 10-second video clip featuring an image of a fallen Donald Trump for $6.6 million, but that was on an NFT marketplace called NiftyGateway. Having renowned auction house Christie’s selling digital art seems to make it more legitimate.

“I do really think that this is going to be seen as the next chapter of art history.”
— Beeple

What is an NFT?

Here is a brief definition of an NFT taken from Forbes.

“An NFT is simply a record of who owns a unique piece of digital content. That content can be anything from art, music, graphics, tweets, memes, games — you name it. If it’s digital and it was created, it can be an NFT. It’s ‘non-fungible” because it can’t be readily exchanged for a similar good at a similar price.

An investor almost 10X-ed his returns on an NFT purchase in 2018. The first music band to release an album as an NFT made $2 million.

The Seattle Artists Taking the Opportunity

Not only was Seattle artist Fewocious selling digital sneakers, but he also sold another million dollars worth of NFTs in partnership with musician Two Feet. It is an amazing change for the artist who ran away from an abusive household in Las Vegas at the age of 12 and eventually moved to Seattle.

He relishes the move to Seattle, saying, “My house has become an art studio with a bedroom. It’s so awesome playing music as loud as I want and doing whatever I want.”

Nifty Gateway is a website when many Seattle artists are selling their NFT digital art.

One such Seattle artist selling is digital sculptor Sam Clover, aka Planttdaddii. She started selling her digital artworks — GIFs and JPEGs of psychedelic flora and fauna — as NFTs in October last year. Each of these sells for over $3000.

“For the last four years, I have been making what I make with no expectation of anything in return, just doing it because I like it. So this is all just extremely surreal — that I have a catalog of work that is now worth a lot of money. I’ve never felt financial stability in my life. Every single day I wake up, like: ‘What is going on?’ And it keeps getting crazier.”

Traditionally artists and writers (as opposed to musicians) sell their work, and their revenue stream for that piece of work essentially ends.

NFT’s differ as they lock into the contact a lifetime of royalties for the artist. Beeple will now receive 10 percent of the sale each time his work is sold after the initial sale. Assuming that, like most art, his work appreciates, this will be a substantial revenue stream for him. Effectively NFT offers creators lifetime equity in their work.

In 2018, Peter Kell paid $38,000 for a digital artwork of Homer Simpson combined with internet meme Pepe the Frog. It was big news at the time, and he was widely mocked. Last month he sold the same artwork for $320,000. Not only did he make a nice profit, but the creator of the artwork also received 10% of the secondary sale.

It also proves the adage he who laughs last laughs longest. 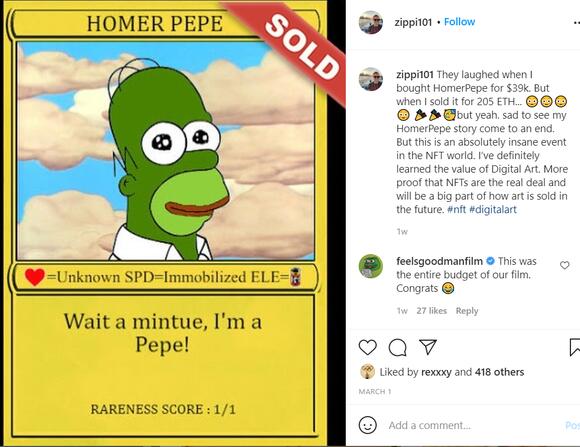 It didn't take long for Fewocious' sneakers to hit the resale market. Within days some were being resold for three times the price. And each sale nets more proceeds for the young Seattle artist.

This NFT is on fire

Musicians are joining the NFT bandwagon. Kings of Leon was the first to release an album as an NFT. In its first week, When You See Yourself made $2 million.

The band offered three token levels as part of the project called “NFT Yourself.” (Nice play on words, Leon). There was a special album package, a second type offering live show perks like front-row seats for life, and a third type is just for exclusive audiovisual art.

Hopefully if it becomes a thing in the future, artists make more money, since some of it’s kind of been lost. You can do with that whatever you want and give it to charitable things that we’re involved in, so it just seemed really right for us. Especially in a time where we’re not touring and crews aren’t touring, a way to just do something a little more futuristic and try to be pioneers in something.”
— Jarred Followill, Kings of Leon

The benefit for the band is additional revenue from a non-traditional stream. What about their fans? They will own a token on the blockchain, which allows them to download the record, exclusive moving artwork, and access to limited edition vinyl. There is a limited amount available. This makes the NFT itself a kind of collectible digital limited edition. They can sell at a later date, much like a rare limited edition vinyl. And of course, the band will get 10% of the sale.

There are more and more Seattle artists getting on board the NFT market. A quick look at Nifty Gateway shows lots of young (and not so young) Seattle artists selling their work. It looks like this will be the way of the future.

I think that we can all agree that the current weather is crazy. It seems to jump from winter to summer, with occasional bouts of spring and fall throughout the week. December was the second warmest ever recorded in San Antonio, with record highs experienced on New Year's Eve and New Year's Day. It made for a very different Christmas holiday period. The last week of December saw foggy bleak mornings followed by sunny and humid afternoons.

It took me two years to return home to San Antonio. I'm Australian, and my wife is from San Antonio, and we divide our time between the two places. However, when COVID hit in early 2020, Australia closed its borders, and we could not travel.

Each year around Christmas time, there are many great light displays in San Antonio. Personally, I love taking in the Riverwalk or the lights at the San Antonio Zoo. This year I was excited when a new light show was announced- Lightscape. This new event was to be held at the San Antonio Botanical Gardens. Lightscape had previously sold out in Chicago and was coming to Brooklyn, Los Angeles, Chicago, Houston, and San Antonio for this holiday season.

Weekend rain in San Antonio forces event to be cancelled

With thunderstorms and rain predicted across this weekend in San Antonio, the San Antonio River Walk has been forced to cancel its popular Ford Fiesta de las Luminarias event. They made the announcement on Twitter earlier today.

The number one dating question asked by Texans

Dating can be tricky, and so many people turn to the internet to find assistance with their relationships and dating lives. Earlier this year, CenturyLinkQuote released their third annual report examining each state's "most-Googled relationship questions. " The report looked at what people across the United States want to know when it comes to relationships.

San Antonio Will Get Its First Taste Of Winter This Weekend

San Antonio residents enjoying the current warm weather better be ready for near freezing conditions this weekend. The National Weather Service says that temperatures may drop into the 30s over the weekend, along with the chance for freezing temperatures.

We all remember the severe winter storm that hit Texas in February, which knocked out power to more than two million people. The cold caused energy demand in Texas to hit a record winter high, and the power grid couldn't meet the energy demands of Texans.

The richest woman in Winnetka

Recently Forbes released the list of the top 400 self-made women in the United States. This list featured business leaders and entrepreneurs who had made their fortune themselves and not through inheritance.

What are the chances of a white Christmas in Texas this year?

Who is dreaming of a white Christmas? As rare as it may be in Texas- there is a slight chance it may occur. While snow is often associated with the northern states, there have been several snowy Christmas' in Texas.

"10,000 National Guard and Texas state troopers deployed to the border for Operation Lone Star. Biden created a crisis at our southern border. Texas is fixing it." Texas Governor Greg Abbott.

A white Christmas in Phoenix? There is always a chance.

As rare as it may be in Phoenix- there is always a slight chance it may occur. While snow over Christmas is often associated with the northern states, there have been several snowy Christmas' in Arizona.

“As a simple kid born in the little town of Uvalde, Texas, it never occurred to me that I would one day be considered for political leadership. It is a humbling and inspiring path to ponder. It is also a path I am choosing not to take at this moment.” Matthew McConaughey.

Texans should be ready for another winter storm

"For our friends in the Southern Great Plains, including Texas and Oklahoma, we are sorry to report that late January may bring some potentially frigid and flaky weather like you experienced last winter. Hopefully, it won’t be as robust, but it doesn’t hurt to be prepared.” Farmers Almanac.

Today Texas Governor, Greg Abbott announced that Samsung Electronics would build a new semiconductor manufacturing facility in Taylor. According to Abbott, Samsung's investment is almost $17 billion investment and will be the largest foreign direct investment in Texas on record.

Many people in Texas are waiting for Matthew McConaughey to announce whether he will run for Texas Governor in 2022. As speculation builds, the latest poll conducted from November 9-16 by the Dallas Morning News and the University of Texas Tyler shows the Texan actor well ahead of Greg Abbott and Beto O'Rourke.

The richest woman in Dallas

Recently I have been writing articles on the wealthiest people in major cities across the United States. Today it is time to take a look at the richest woman in Dallas. That title belongs to Margot Birmingham Perot- the widow of the late technology entrepreneur and presidential candidate H. Ross Perot, Sr.

The richest self-made woman in Nashville

Recently Forbes released their annual Top 100 list of the richest self-made women. The list consists of the 100 most successful women entrepreneurs and executives in the United States.