The Shocking Ad That Tried to Kill Santa Claus with COVID

Why giving Santa COVID backfired for this organisation

So goes the line from the famous song, of the same name, sung by the Jackson Five amongst others.

The song may not have been such a hit if they sang;

Father Christmas is beloved by children around the world. He brings joy and happiness each year to all those who have been nice (and some who have been naughty). There would be few people who would want to kill Saint Nick. Or see him close to death.

Except perhaps the National Health Service (NHS) of the United Kingdom. Just when I thought 2020 couldn’t offer up any more surprises the NHS make a late bid for the worst advertisement of 2020. And succeed.

A Not So Festive Spot

It was the first time that NHS had launched a Christmas campaign for its Charities Together project. The brief given to the digital advertising agency, Iris, was to “highlight the ongoing commitment and hard work of NHS staff and volunteers to keep us safe and well in what has been and continues to be a really challenging time for the NHS.”

They wanted to encourage the public to show their appreciation for overworked staff, who like all health workers, have had a year from hell. It’s a great sentiment and a message that should be spread.

The way the media agency decided to tackle this was ill-conceived. The ad featured a sick Santa in an oxygen mask being rushed to hospital appearing to be close to death from COVID. The great staff at the NHS take care of him, and Santa recovers. After leaving the hospital and waving goodbye to the medics who helped to save him, the advert ends with the nurse receiving a present which reads: “Thank you for everything you’ve done for all of us, Santa.”

The thinking behind the creative was to highlight the positive work of the NHS staff and act as a form of tribute to their dedication in 2020. Instead, they got a very negative reaction to the one they were hoping for.

As soon as the ad was launched, there was a swift and brutal backlash on social media calling the commercial “shameful” and “the worst form of emotional blackmail.” In a year when many have suffered from mental health problems, there was a concern about the impact this could have on children.

The United Kingdom had just gone into another lockdown, and this ad seemed to exacerbate community anxiety ahead of what is traditionally a festive period.

As the backlash continued for a few days, the NHS was forced to remove the advertisement from all channels. They also issued an apology of sorts. I say of sorts as they diminished their remorse by adding that the ad “isn’t aimed at children and hasn’t been shown on TV.” As if that made it OK.

“We worked closely with the team behind the ad to make sure it was produced responsibly, and it was cleared for use by the relevant regulatory authority. However, we are sorry to the parents of any young children who have been upset by watching the ad and to the young children themselves; they were not the intended audience for it.”

Does this make it worse for the NHS? The fact they worked closely with the agency and clearly approved of the concept. Did they think that showing a sick and close to death Santa Claus would be positive and uplifting? And in an age where every child has a phone, and a tablet, did they think that by omitting the advertisement from TV broadcast, children wouldn’t see it?

The original ad has been pulled, but you can see a copy of it here and see how much they missed the mark.

The now-iconic image of Santa as a jolly fat man in a red suit with a giant beard was created by artist Fred Mizen for Coca-Cola and has featured in Coke advertising for over 100 years.

While Coke generally gets it right with its use of Santa, there are a few other examples of brands misusing Santa in their advertising. Perhaps none as traumatic as the NHS, but it would be remiss of me not to showcase a few more. 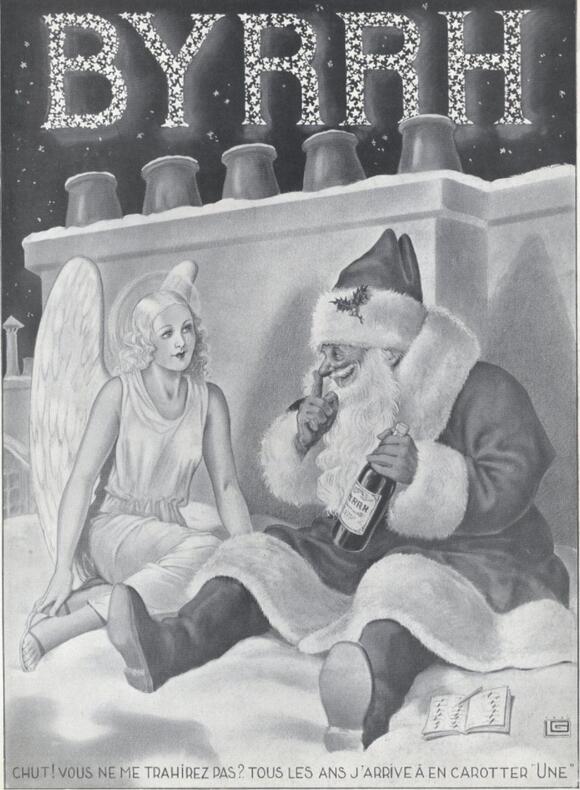 It’s cold at the North Pole. And delivering a sleigh load of presents to people across the world is tiring. No wonder Santa needs a drink to get through it. And his beverage of choice was apparently the French aperitif, Byrrh. 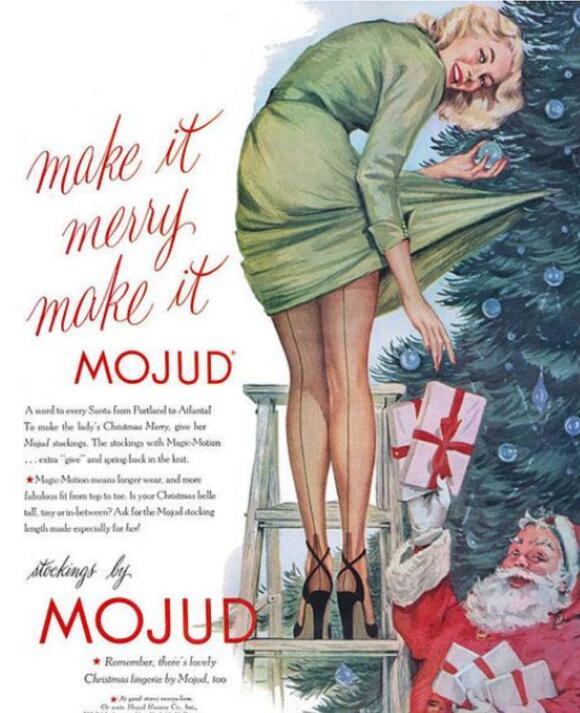 Mojud, in an attempt to sell stockings, used a rather happy Santa in this advertisement from the 1950s. Perhaps he was hoping the lady was both naughty and nice. 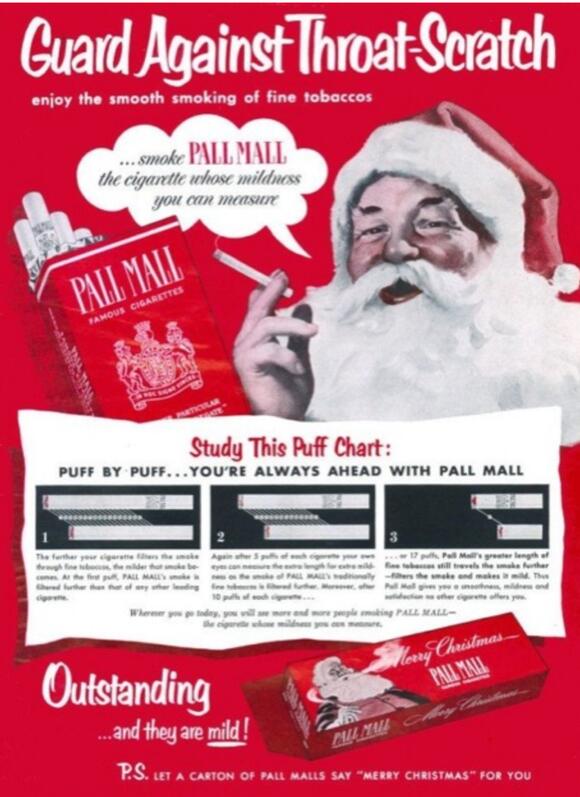 Before being banned, tobacco ads used anyone and everyone to sell their product. Doctors were common; even babies were used. So it’s no surprise that Santa was featured in several ads with a cigarette in hand. A Google search will show how fond he is of smoking and how many brands he “represented.”

A word of advice to all marketers, advertisers, and creators. Stick with the image of Santa that is loved by all — happy, jolly, and fun. It sure will help the product you are trying to sell. And despite the abysmal failure of the NHS on this occasion, I hope the people of the UK do show their support and pride in their efforts.

Who doesn't love a free chicken nugget? How about eight?. This week from Monday 24th January until Saturday 29th January, people in San Antonio will be able to score themselves a free eight-count nugget meal at Chick-fil-A.

I think that we can all agree that the current weather is crazy. It seems to jump from winter to summer, with occasional bouts of spring and fall throughout the week. December was the second warmest ever recorded in San Antonio, with record highs experienced on New Year's Eve and New Year's Day. It made for a very different Christmas holiday period. The last week of December saw foggy bleak mornings followed by sunny and humid afternoons.

It took me two years to return home to San Antonio. I'm Australian, and my wife is from San Antonio, and we divide our time between the two places. However, when COVID hit in early 2020, Australia closed its borders, and we could not travel.

Each year around Christmas time, there are many great light displays in San Antonio. Personally, I love taking in the Riverwalk or the lights at the San Antonio Zoo. This year I was excited when a new light show was announced- Lightscape. This new event was to be held at the San Antonio Botanical Gardens. Lightscape had previously sold out in Chicago and was coming to Brooklyn, Los Angeles, Chicago, Houston, and San Antonio for this holiday season.

Weekend rain in San Antonio forces event to be cancelled

With thunderstorms and rain predicted across this weekend in San Antonio, the San Antonio River Walk has been forced to cancel its popular Ford Fiesta de las Luminarias event. They made the announcement on Twitter earlier today.

The number one dating question asked by Texans

Dating can be tricky, and so many people turn to the internet to find assistance with their relationships and dating lives. Earlier this year, CenturyLinkQuote released their third annual report examining each state's "most-Googled relationship questions. " The report looked at what people across the United States want to know when it comes to relationships.

San Antonio Will Get Its First Taste Of Winter This Weekend

San Antonio residents enjoying the current warm weather better be ready for near freezing conditions this weekend. The National Weather Service says that temperatures may drop into the 30s over the weekend, along with the chance for freezing temperatures.

We all remember the severe winter storm that hit Texas in February, which knocked out power to more than two million people. The cold caused energy demand in Texas to hit a record winter high, and the power grid couldn't meet the energy demands of Texans.

The richest woman in Winnetka

Recently Forbes released the list of the top 400 self-made women in the United States. This list featured business leaders and entrepreneurs who had made their fortune themselves and not through inheritance.

What are the chances of a white Christmas in Texas this year?

Who is dreaming of a white Christmas? As rare as it may be in Texas- there is a slight chance it may occur. While snow is often associated with the northern states, there have been several snowy Christmas' in Texas.

"10,000 National Guard and Texas state troopers deployed to the border for Operation Lone Star. Biden created a crisis at our southern border. Texas is fixing it." Texas Governor Greg Abbott.

A white Christmas in Phoenix? There is always a chance.

As rare as it may be in Phoenix- there is always a slight chance it may occur. While snow over Christmas is often associated with the northern states, there have been several snowy Christmas' in Arizona.

“As a simple kid born in the little town of Uvalde, Texas, it never occurred to me that I would one day be considered for political leadership. It is a humbling and inspiring path to ponder. It is also a path I am choosing not to take at this moment.” Matthew McConaughey.

Texans should be ready for another winter storm

"For our friends in the Southern Great Plains, including Texas and Oklahoma, we are sorry to report that late January may bring some potentially frigid and flaky weather like you experienced last winter. Hopefully, it won’t be as robust, but it doesn’t hurt to be prepared.” Farmers Almanac.

Today Texas Governor, Greg Abbott announced that Samsung Electronics would build a new semiconductor manufacturing facility in Taylor. According to Abbott, Samsung's investment is almost $17 billion investment and will be the largest foreign direct investment in Texas on record.

Many people in Texas are waiting for Matthew McConaughey to announce whether he will run for Texas Governor in 2022. As speculation builds, the latest poll conducted from November 9-16 by the Dallas Morning News and the University of Texas Tyler shows the Texan actor well ahead of Greg Abbott and Beto O'Rourke.

The richest woman in Dallas

Recently I have been writing articles on the wealthiest people in major cities across the United States. Today it is time to take a look at the richest woman in Dallas. That title belongs to Margot Birmingham Perot- the widow of the late technology entrepreneur and presidential candidate H. Ross Perot, Sr.