Writing on business and local events. Follow me for the latest updates.

Australia has fought in both World Wars, the Vietnam war and in many other conflicts since. It has never engaged in combat on its own soil. Except on one occasion. When it went to war against emus.

Emus are a native Australian bird. The second-largest bird on Earth, behind only the ostrich, they are up to 1.9 metres (6.2 ft) in height and run at speeds of 50 km/h (31 mph). The emu features on Australia’s coat of arms and also on its fifty-cent coin. Clearly, there is some affinity with the emu.

This wasn’t always the case.

The first attack — the emus assault

In search of water, this newly irrigated land was attractive to emus; as was the wheat. The numbers had always been manageable but a longer drought then normal saw more than 20,000 emus migrate from the Australian outback towards these farms. The large birds would also use their strong legs to break through the fences around the farms, creating an entry point for rabbits. There they would wreak havoc by eating all the wheat and damaging property. The emus and to a lesser extent, the rabbits were destroying the farmers livelihoods. On top of this, the farmers were frustrated that the promised government subsidies hadn’t materialised.

To say the farmers were struggling is an understatement.

Unable to stop the marauding emus, a delegation of farmers went to Australia’s capital — Canberra, on the other side of the country to demand approval to slaughter the emus. They had guns, and they had combat experience. They were ready to go to war.

The Australian defence minister, Sir George Pearce, agreed on one condition; the war would be fought not by the farmers, but by the Australian military. Pearce believed this would be a way to keep the disenchanted farmers onside as well as provide valuable target practice for his army. So confidant was Pearce of a quick victory he sent along a cameraman to record a triumph and ordered the men to keep the emu feathers for their hats.

The military campaign was led by Major GPW Meredith of the Royal Australian Artillery. Accompanied by two soldiers, two Lewis guns, the cameraman, and 10,000 bullets they entered the region determined to defeat the pesky emus.

The strategy of the men was to herd the emus into a small area and once they were corralled to slaughter them en masse. They were set to strike in October.

The mission suffered an early setback when heavy rain caused the emus to scatter. The rain was great for the crops, not so great for fighting emus. They were too widespread to attack, and the campaign was halted.

On November 2, they tried again. Again they had troubles — they hadn’t counted on the military nous of the large flightless bird. The emus are actually a strategic bird, and when confronted, they broke into small groups and fled in different directions. This made it impossible to corral them.

On the one occasion, the military team managed to get close enough to a small group of emus; they still struggled to kill their prey. The Lewis guns repeatedly jammed, and when they worked, the emus proved remarkably resilient to their bullets. The bullets seemed to bounce off them. It was reported that one emu was shot six times before running off. In this second attempt, they only managed to kill twenty of the emus.

A farmer with one of the emus killed by the military. Source WikiCommons

Soon after, a ceasefire was ordered, and a frustrated Meredith commented:

“If we had a military division with the bullet-carrying capacity of these birds it would face any army in the world. They can face machine guns with the invulnerability of tanks.”

In his official report, Meredith tried to spin a positive on the situation, noting while only twenty emus were killed, the humans had no casualties. I guess he was an optimist at heart.

The farmers wanted the war to be won, and after some lobbying from the Premier of Western Australia, hostilities resumed on November 13. Three more weeks of battle ensued, and Meredith and his team had better results. By the time they had exhausted all 10,000 of their bullets, they had killed 986 emus. Better than the twenty from the first campaign of the war but still less than 10% of the opposing side. It is also estimated to be one of the worst bullet-to-kill ratios in military history. 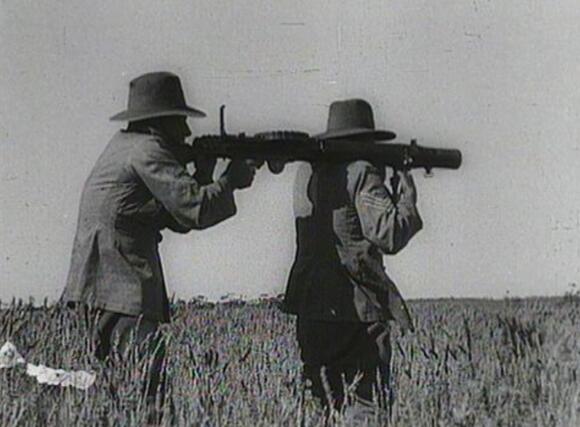 Victory to the emus

As the war ended its first-month public sympathy moved to the emu. Media reports — showing fleeing or dying emus, revolted the public and there were even protests back in England at the ongoing emu war.

The Australian Parliament questioned Pearce over the tactics and asked if there was a better way to solve the problem. One member of Parliament even sarcastically asked if there were to be medals of honor struck for this war. Clearly they were not impressed by the failed attempts thus far. Pearce assured Parliament they were acting humanely and the tactic of mass culling was required. He requested another chance to defeat the emus.

In the end, public opinion won out, and the war was ordered to end. The emus had won.

The emus continued to ravage the wheat farms of Western Australia, and two years later the farmers again requested military assistance from the government.

Would this be The Emu War II?

Happily for the emus, the request was denied. Appeals were made by Western Australian farmers again in 1944 and 1948, but again these were refused.

Australia had learned its lesson and would never again engage in battle with the emu. The emus were too strong. They had won the Great Emu War, and their victory ensured no more Emu Wars would be fought.

Writing on business and local events. Follow me for the latest updates.

The richest person in McLean is giving away millions

I have been writing a series of articles about successful entrepreneurs and business leaders and what these wealthy people do to give back to the community. Readers love to see good news stories about people doing good things.

One of Houston's richest people just made a $50 million donation

I have recently written about the generosity of several of Houston's richest people. The richest person in Houston, Richard Kinder, has promised to give away 95% of his wealth. David Weekley, the founder of David Weekley Homes, signed the Giving Pledge and has donated millions of dollars to Houston organizations. And John and Laura Arnold were the biggest philanthropists in Houston last year, donating $210 million to various organizations.

Should marijuana be legal in Texas? A new poll says most Texans say yes.

A poll conducted this week by the Dallas Morning News-University of Texas at Tyler has found that 60% of Texans support the legalization of marijuana for recreational use. This included 75% of Democrat voters and 42% of Republican voters.

The Salisbury billionaire giving away his fortune

I write many articles on business leaders, entrepreneurs, and billionaires. And when I do, I get messages from readers asking what these people do to give back to the community. So today, I thought we could take a quick look at the billionaire who grew up in Salisbury, North Carolina, and has promised to give most of his fortune away.

The richest couple in Oklahoma City is giving away millions

I have been writing a series of articles on business leaders and entrepreneurs, examining how they give back to their communities. Today it is time to look at the richest couple in Oklahoma City and what they have been doing for the city.

The richest person in Kansas City is giving away millions

I have been writing a series of articles about successful entrepreneurs and business leaders and what these wealthy people do to give back to the community. Readers love to see good news stories about people doing good things.

The couple investing billions into Buffalo

I have been writing a series of popular articles on successful billionaires, entrepreneurs, and business leaders who put their fortune to good use and support local organizations.

Sarasota voted best place to retire in the United States

This week, the US News and World Report released their annual list of the 150 best cities to live in the United States. And its good news for residents of Colorado Springs with the city coming in second place.

Bernie MarcusImage used under Creative Commons licence. What would you do if you were a multi billionaire and the richest person in Atlanta?. Perhaps by a huge mansion and a luxury car? Well if you are Bernie Marcus you promise to give most of it away.

We all love to read articles about the richest people living in our city. But readers always want to know what these people do to give back to their local community. Today, let's take a quick look at the richest person in Tampa Bay and what they are doing to assist charitable organizations.

This Jacksonville billionaire is giving millions to local organizations

Recently I have been writing articles on billionaires who are supporting their local communities. Today it is time to look at the Jacksonville billionaire who is giving away millions to organizations in the state.

The Denver billionaire giving his fortune away

I have been writing a series of articles on entrepreneurs and business leaders who have decided to give back to the community. Today it's time to like at Charlie Ergen- the Denver billionaire who has promised to donate most of his fortune.

It's been a bad 48 hours for the richest person in Fort Worth. Alice Walton, who is also the wealthiest female in the United States, has lost $9 billion in the last two days. Of course, the Walton surname will be familiar to people across the United States- it's the family behind the Walmart chain.

House prices in Phoenix continue to rise. A report from the Arizona Regional Multiple Listing Service said that housing sale prices have increased by 20% over the previous year. The median sales price in Phoenix was $460,000 in April and is projected to hit $475,000 in May.

According to Forbes, "when MacKenzie Scott, the ex-wife of Amazon founder Jeff Bezos, donated $275 million to Planned Parenthood earlier this year, it broke records. The gift was the largest in the organization’s history from a single donor."

Richest person in Houston is giving 95% of his wealth away

What would you do if you were the richest person in Houston?. Perhaps you would go on a spending spree- buying luxury cars and huge mansions. Maybe you would try to buy the Houston Rockets and get them back to the NBA finals.