The Clay High Blue Devils finished the 2022 football season with a 3-7 record.

Clay had a rough time this season due to losing a lot of players from last season who either graduated or transferred. It was apparent from the jump that Clay would be in a rebuilding year after they got decimated at home for the first game of the season against in-county rival Fleming Island Golden Eagles, 49-7.

However, head coach Kyle Kennard is no stranger to turning a program around. Before Kennard took over as head coach in 2020, Clay had a 1-9 record. Kennard would lead the team the following year to a 10-2 record and a playoff run.

Even though the season was disappointing by Clay High standards, they have a young core of players who got an abundance of experience this season and showed a lot of potential.

Junior wide receiver/defensive back Payton Dykas was Clay High’s best player this season. Clay was stuck in situations numerous times where someone needed to make a play and Dykas answered the call. Dykas caught 52 passes for 931 yards and led the county with 14 receiving touchdowns, according to MaxPreps. On defense, Dykas recorded 31 total tackles and two interceptions. 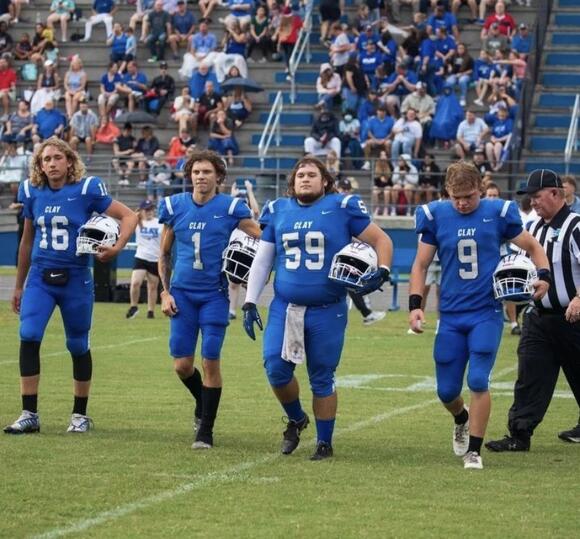 With the Middleburg Broncos losing the Regional Quarterfinal on November 11 to the Escambia Gators 42-18, Middleburg ended the season with a 5-6 record. Despite not finishing the season with a winning record, Middleburg was the only high school in Clay County to make it into the 2022 playoffs. The Broncos were able to secure a spot in the playoff because of a weak district. The Broncos finished second out of four teams in 3S District 3. The two teams behind them in the district, Orange Park and Ridgeview, had a combined three wins.

With the 2023 high school football regular season ending last week, the Middleburg Broncos are the only team in the county to make the playoffs, set to play in the Regional Quarterfinal against the Escambia Gators in Pensacola Friday night.

The Middleburg Broncos dominated their senior night against the in-county rival Orange Park Raiders on Friday, 35-14. The Broncos were riding high from the first drive of the game. Middleburg won the toss and elected to receive. Running back TJ Lane would score the first touchdown of the game on a 58-yard run. Middleburg would also get the 2-point conversion off another run from Lane to put the Broncos up, 8-0.

The Fleming Island Golden Eagles lost their homecoming game in heartbreaking fashion to the Creekside Knights on Friday night, 38-35. Fleming Island won the toss and elected to defer to the second half to start the game. Creekside went three-and-out on their first drive due to a sack by edge rusher Demhir Jackson. Fleming’s offense drove to Creekside’s side of the field but turned the ball over on downs around the Creekside 30-yard line.

The Clay High Blue Devils lost their homecoming game after leading for the first three quarters against the Pedro Menendez Falcons Friday night, 22-18. The first half of the game was a defensive struggle with only three points scored in the first half. Clay High had a steady drive in the second quarter that got them up 3-0.

The Oakleaf Knights lost a heartbreaker on their Thursday night homecoming game to District rival Creekside Knights, 49-48. The game was originally scheduled for last Friday but was moved due to Hurricane Ian.

All of the high schools in Clay County set to have football games this Friday will have those games postponed to various dates next week due to Tropical Storm Ian. The Clay High Blue Devils are on a bye this week. Therefore, they are the only school that didn’t need to adjust their schedule amid Tropical Storm Ian.

The Orange Park Raiders lost their homecoming matchup against the Nease Panthers on Friday night, 27-12. Heading into the matchup, Nease was 0-4, and Orange Park was 1-3 Nease jumped out to an early lead in the matchup by running the ball against the Orange Park defense. Nease did not attempt to pass the ball once during the opening drive, even though their quarterback, Marcus Stokes, is a 4-star prospect and committed to the University of Florida. They scored on the drive with a three-yard touchdown run by Nease running back Samuel Milton. The extra point was wide right, starting the game off with a score of 6-0. Both offenses stayed quiet for the remainder of the first quarter, keeping the score 6-0.

The Oakleaf Knights traveled to Fleming Island Friday night and upset the Golden Eagles, 26-20. Oakleaf was 2-1, and Fleming Island was 3-0 heading into their matchup. Oakleaf put this game out of reach because they forced three interceptions and a forced fumble.

The Clay High Blue Devils rebound from a week one loss by beating the Ridgeview Panthers at Ridgeview’s home opener Friday night, 33-22. Clay High’s Dwonya Williams recovered a fumble on Ridgeview’s first offensive drive. From there, Clay marched down the field where Clay High quarterback Merrick Rapoza rolled out to his right to hit wide receiver Payton Dykas in the corner of the endzone for the first score of the game.

The Fleming Island Golden Eagles football team traveled to Green Cove Springs Friday night and dominated the Clay High Blue Devils in the opening game of the season, 49-7. After a brief 15-minute weather delay due to lightning, Clay High held its own for the first half of the first quarter. However, the speed, strength and experience of the Fleming Island roster were too much for a young Clay High team who lost many of their experienced players to graduation or transfer.

With the preseason games for Clay County football teams coming up this Friday, head coaches are putting the final touches on their rosters and depth charts for the season. Some coaches will be heading into their first season while some coaches have done it for years.

With the 2022 football season around the corner, defenses across Clay County are expected to shut down the high-scoring offenses they will face in the upcoming season. Listed below are some of the top defensive players in Clay County heading into the season.

With the 2022 football season around the corner, teams across Clay County are expected to put on a fireworks show of points on offense. Listed below are some of the top offensive players in Clay County heading into the 2022 season.

Fleming Island four-star running back Samuel Singleton announced his commitment to FSU Friday night over offers from Penn State, Tennessee, Virginia Tech and LSU. FSU head coach Mike Norvell released a statement on his Twitter last night about Singleton’s commitment to the Seminoles. “Great day to be a Florida State Seminole! Playmaker is coming and speed is coming with him to Tribe 23 and a part of the Nole Family. Future is bright in Tallahassee,” said Norvell.

The much-anticipated 2022 high school football season for Clay County is just around the corner. The FHSAA has released the schedule for each team in the county for the 2022 season.

With the start of the 2022 high school football season being a month away, three schools in Clay County have the best chance to make a significant run in the FHSAA playoffs. Fleming Island finished last season with a 6-5 record and 3-2 7A District 3 record, according to MaxPreps. Even though Fleming Island finished the season a game above .500 and plays in one of Florida’s toughest classifications, they have the necessary pieces to make a significant run for the 2022 season. Sophomore quarterback Cibastian Broughton started as a freshman last season and will continue to develop. Broughton has a senior-heavy team to help him win games this season. Four-star running back Sam Singleton and three-star Darion Domineck are explosive weapons on offense that are wanted by some of the top college programs in the country. Fleming Island also has explosive defensive players in three-star linebacker Abram Wright and Jhace Edwards who combined for 143 total tackles. If Broughton improves his sophomore year and key players on both sides of the ball stay healthy, the sky is the limit for Fleming Island. Fleming Island’s first matchup is against Clay High on August 26.