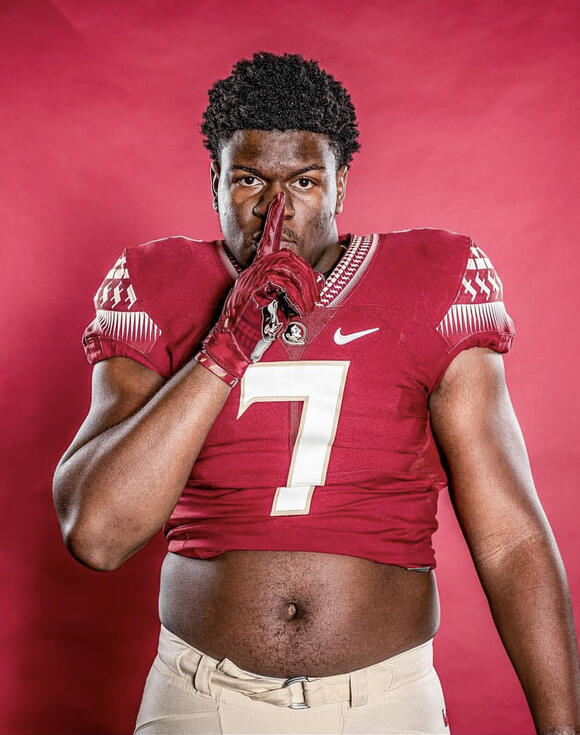 Orange Park Raiders four-star offensive lineman Roderick Kearney committed to FSU Sunday evening, hours after he had made an official visit with the Florida Gators.

Kearney released a statement on his Instagram about his commitment.

“First and foremost, I would like to start by thanking God. I would not be where I am without him. Next, I would like to thank my mother for countless hours of listening, understanding, providing financial support, and being my support system throughout the process. I also want to thank Kendy Charles for mentoring me and helping shape me into the man and player I am today. Lastly, I want to thank my brothers Nolan Chambers, Brian Green, And JoJo Restall for pushing me and grinding with me since day one. With that being said, I will be furthering my athletic and academic career at Florida State University,” said Kearney in a statement.

Even though numerous analysts covering the Gators believed they could land the Orange Park prospect, Kearney seemed interested more in FSU for a while. Kearney showed more interest in FSU because he has taken five unofficial visits to FSU since July of 2021, according to 247Sports. Florida didn’t get him on campus for an unofficial visit until March 2022.

With the early signing period months away, Kearney wanted to commit on Sunday because he was done with the recruiting process and he felt at home when he would visit FSU. He announced on Twitter that he is done with his recruitment. “Recruitment is 1,000% closed. I’m a Nole respectfully,” said Kearney.

Kearney is currently the highest-ranked player that is committed to FSU. He is one of eight commits for Mike Norvell and FSU, bringing the class to the 45th best nationally, according to 247Sports. At the time of his commitment, Kearney is the only offensive lineman in FSU’s 2023 class.

FSU is getting a mauler in the run game, according to Andrew Ivins of 247Sports. Ivins views Kearney as a Power Five starter with the potential to be a day three pick if he picks up the speed of the game at the college level. Kearney plays right tackle for Orange Park but will make a position change at the next level. Offensive coordinator Alex Atkins recruited Kearney to play center.

With the preseason games for Clay County football teams coming up this Friday, head coaches are putting the final touches on their rosters and depth charts for the season. Some coaches will be heading into their first season while some coaches have done it for years.

With the 2022 football season around the corner, defenses across Clay County are expected to shut down the high-scoring offenses they will face in the upcoming season. Listed below are some of the top defensive players in Clay County heading into the season.

With the 2022 football season around the corner, teams across Clay County are expected to put on a fireworks show of points on offense. Listed below are some of the top offensive players in Clay County heading into the 2022 season.

Fleming Island four-star running back Samuel Singleton announced his commitment to FSU Friday night over offers from Penn State, Tennessee, Virginia Tech and LSU. FSU head coach Mike Norvell released a statement on his Twitter last night about Singleton’s commitment to the Seminoles. “Great day to be a Florida State Seminole! Playmaker is coming and speed is coming with him to Tribe 23 and a part of the Nole Family. Future is bright in Tallahassee,” said Norvell.

The much-anticipated 2022 high school football season for Clay County is just around the corner. The FHSAA has released the schedule for each team in the county for the 2022 season.

With the start of the 2022 high school football season being a month away, three schools in Clay County have the best chance to make a significant run in the FHSAA playoffs. Fleming Island finished last season with a 6-5 record and 3-2 7A District 3 record, according to MaxPreps. Even though Fleming Island finished the season a game above .500 and plays in one of Florida’s toughest classifications, they have the necessary pieces to make a significant run for the 2022 season. Sophomore quarterback Cibastian Broughton started as a freshman last season and will continue to develop. Broughton has a senior-heavy team to help him win games this season. Four-star running back Sam Singleton and three-star Darion Domineck are explosive weapons on offense that are wanted by some of the top college programs in the country. Fleming Island also has explosive defensive players in three-star linebacker Abram Wright and Jhace Edwards who combined for 143 total tackles. If Broughton improves his sophomore year and key players on both sides of the ball stay healthy, the sky is the limit for Fleming Island. Fleming Island’s first matchup is against Clay High on August 26.

As the high school football season comes around the corner, multiple Clay County football players have already found their new homes at the next level. Listed below are some of the seniors in Clay County who have announced the college programs they plan to attend for the next three to four years.

Clay High School administrators confirm that three-star cornerback Jarvis Lee Jr will transfer from Clay High to IMG Academy for the 2022-23 school year. Lee plans to stay at IMG for one semester, according to his Twitter. He tweeted on June 7 that he plans to enroll in college early.