Providing local NYC stories as a Bronx-born and raised journalist. 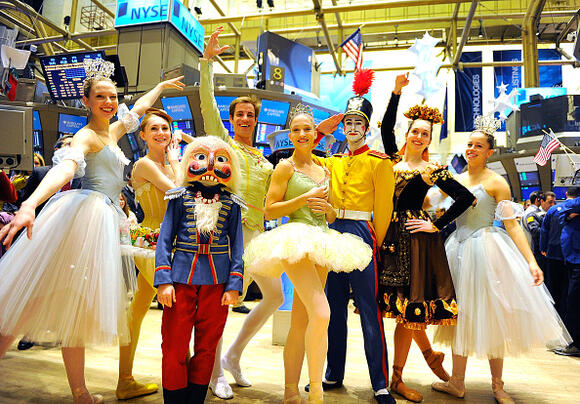 (NEW YORK) Welcome back, fellow New Yorkers! This is the New York City Daily Roundup, and we have the latest stories for you to read regarding all things from the Big Apple. Today is Wednesday, Dec. 29, and it is a cloudy day in the city!

Temperatures will peak at 45°F on Wednesday, with no rain in sight as clouds cover the skies all day. Sunset will take place around 4:36 p.m. as the weather remains in the mid-40s.

Here's what you need to know this Wednesday:

1.) 'Nutcracker' shuts down due to omicron-related concerns

On Tuesday, the organizers for George Balanchine's "The Nutcracker" announced all remaining shows would be canceled this season due to positive COVID-19 test results, according to ABC 7 NY. The show was scheduled to run through Sunday at Lincoln Center's David H. Koch Theater.

"While New York City Ballet had hoped to resume performances this evening, we have made the decision that continuing to perform at this time would not be in the best interest of the NYCB community, whose health and safety is our number one priority," NYCB Executive Director Kathy Brown and Artistic Director Jonathan Stafford said in a statement. "We are extraordinarily proud of everyone who safely came together to present 30 beautiful performances of George Balanchine's The Nutcracker in recent weeks, and we are also very grateful to the thousands of people who attended."

2.) New York Knicks win big in Minnesota, improve to 9-7 on the road

The New York Knicks kicked off their road trip with a win on Tuesday, as they beat the Minnesota Timberwolves by a score of 96-88. Knicks center Mitchell Robinson recorded a double-double in the win, with 14 points and a season-high 15 rebounds.

“You can’t say enough about the way he played,” head coach Tom Thibodeau said. "I thought his rebounding and Julius’ rebounding was huge for us.”

The Knicks continue their four-game road trip on Wednesday as they travel to Detroit for a game with the Pistons at 7 p.m.

The following locations in the city have been listed as closed, per NBC 4 New York:

Providing local NYC stories as a Bronx-born and raised journalist.

Washington Heights subway station to operate without escalators until 2023

(Drew Angerer/Getty Images) (NEW YORK) The 34th Precinct will host a Build the Block meeting at the auditorium of George Washington High School on Wednesday, according to the New York City Police Department.

(Tim Mossholder/Unsplash) (NEW YORK) This Thursday, Le Chéile — a local Irish pub and restaurant — will host a stand-up comedy night in Washington Heights. The bar is home to "Concussion Comedy" — a comedy show that takes place every first and third Thursday of the month from 8:30 to 10 p.m.

Weekend in Washington Heights: Learn to play dominoes at the Highbridge Recreation Center

(NEW YORK) Washington Heights residents can take advantage of the warm weather on Saturday and head to Highbridge Recreation Center to play dominoes for free, thanks to an event organized by the New York City Department of Parks and Recreation.

NYPD seeks man behind robbery at gunpoint in Washington Heights

(Danielle Cerullo/Unsplash) (NEW YORK) The Highbridge Recreation Center will host a free Zumba class for all Washington Heights locals on Wednesday, according to the New York City Department of Parks & Recreation.

(David McNew/Getty Images) (NEW YORK) The Chamber of Commerce of Washington Heights & Inwood, in partnership with the Community League of the Heights, announced its job fair will take place on Saturday, May 21, at the Community Health Academy of the Heights.

(NEW YORK) While many may think of tacos and margaritas on Cinco de Mayo, Washington Heights residents may be in the mood for fried chicken sandwiches thanks to the newly-opened Chick-fil-A.

(Michael M. Santiago/Getty Images) (NEW YORK) The New York City Police Department on Tuesday released surveillance footage of two men wanted for the assault of another man that took place last month on a subway train in Washington Heights, according to Patch.

(Spencer Platt/Getty Images) (NEW YORK) New York City's Department of Transportation, as part of the local Vision Zero campaign, rolled out one of its new graphic billboards in Brooklyn on Monday that targets speedy drivers across the boroughs, according to ABC 7 NY.

(Paolo Chiabrando/Unsplash) (NEW YORK) The UP Theater Company will host the premiere of Lizzie Donahue's "A Barn Play" starting Wednesday, according to All Arts. The new play will run from May 4 through May 21 at the Fort Washington Collegiate Church in Washington Heights. "A Barn Play," directed by Leslie Kincaid Burby, is a dark comedy that "explores the power of creating art amidst oppression when a cast of farm animals rehearses their show."

(NEW YORK) Celebrate International Jazz Day in the Heights this Saturday with a free performance from Cucho Martinez and friends at J. Hood Wright Park. The free show will start at 2 p.m. and end at 3:30 p.m. Martinez, currently playing the bass guitar, rose to fame thanks to his talent on the maracas. Throughout his career, he worked with Latin jazz greats such as Horace Silver and Mongo Santamaria.

(Eduardo Munoz Alvarez/Getty Images) (NEW YORK) The New York City Police Department continues to search for a man who attacked and shouted an anti-gay slur against another man while on a subway train in Washington Heights last month, according to FOX 5 NY.

(Rob Kim/Getty Images for The Recording Academy) (NEW YORK) We don't talk about Bruno, but we definitely talk about Lin-Manuel Miranda. The 42-year-old Washington Heights native recently donated an estimated $40,000 worth of musical instruments to the George Washington Educational Campus in Washington Heights earlier this month, according to Patch.

Rite Aid to close Washington Heights location in May

Rite Aid pharmacy at the intersection of St. Nicholas Avenue and West 186th Street.(Anthony Payero/NewsBreak) (NEW YORK) One of the few remaining chain drugstores in Washington Heights will shut its doors for good on May 3, according to Patch. The Rite Aid, located at 1510 St. Nicholas Ave., has serviced the surrounding neighborhood for over a decade, a company spokesperson confirmed to Patch.