Andrew Roth is a reporter and photojournalist in Michigan covering politics, technology, culture and their intersection. Andrew has had bylines in news outlets like the Detroit News, Michigan Advance and Flint Beat. He was named one of the best political reporters in Michigan by the Washington Post and his work has been cited by outlets like Bloomberg, Endgadget, Daily Kos and others. You can follow him on Twitter at @RothTheReporter and @RothsReviews, and on Instagram at @RothTheReporter. 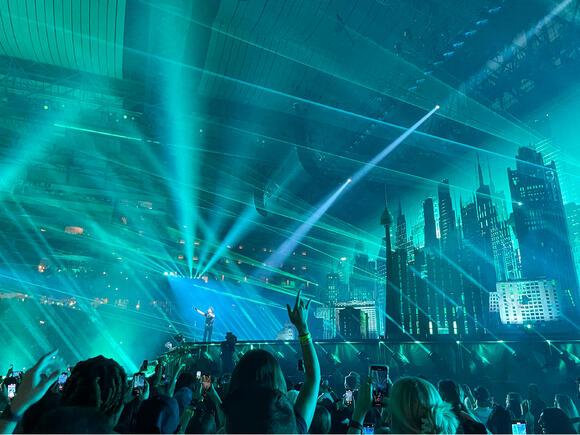 The Weeknd performs in Detroit on July 27, 2022.Andrew Roth

This week in Detroit, the weekend started a few days earlier than usual.

Pop-R&B superstar The Weeknd, born Abel Tesfaye, finally brought his After Hours Til Dawn tour to Ford Field on Wednesday after three delays, the release of a second album to support, a move from arenas to football stadiums, and a cancelled opener (really, nearly co-headliner) in Doja Cat.

The wait was worth it for more than 40,000 screaming fans – the vast majority of them under the age of 30, and skewing more towards women than men – a far cry from when The Weeknd performed to a Fox Theatre that wasn’t sold out (with a capacity of around 5,000 people) back in 2013.

Of course, since then, The Weeknd has broken several Billboard chart records, won another Grammy, and performed at the 2021 Superbowl Halftime Show.

After Mike Dean and Kaytranada performed opening sets (the tour’s original supporting act, Doja Cat, cancelled her appearances as a result of tonsil surgery she had to undergo after vaping while on antibiotics), a low, eerie synth track that sounded like it could have come straight from the Stranger Things score began playing on a loop for more than an hour as the stage was hidden behind a wall of fog and spotlights.

Before the main event began, a trailer for The Weeknd’s upcoming HBO series “The Idol” played on screens throughout the stadium, advertising the show as being from Tesfaye’s “sick and twisted mind.”

As the show began, audience members were transported into one of the worlds concocted by that sick and twisted mind. More than 20 backup dancers, shrouded head to toe in red, somberly took the stage as a set depicting a crumbling, seemingly post-apocalyptic city skyline emerged from behind the wall of fog, opposite a large, floating moon.

Between opening acts, some fans were still lining up at the box office to purchase tickets, some of them expressing disappointment that floor seats were sold out. Little did they know that they got the better end of the deal by sitting in the stadium seating.

As photographers were escorted out of the venue following the first three songs, Tesfaye descended the steps from the stage to a less elevated catwalk spanning nearly the length of the stadium, where he spent a majority of the night. Fans on the floor craned their necks and occasionally climbed on top of their folding chairs trying to catch a glimpse of where he was at any given time.

As he began performing his fourth song, “How Do I Make You Love Me,” Tesfaye picked up a rose that was sitting on the catwalk to throw into the audience.

Aside from shouting out Detroit in several songs, a moment of banter about how Chicago’s audience seemed a bit louder, and a promise to return to Detroit in the near future, that was the extent of The Weeknd’s interactions with the audience.

But what the show lacked in intimacy, it made up for in spectacle.

You could feel the heat from the fireballs shooting into the air from the very back of the floor section; you could feel the bass of the music not just pulsing in your chest, but reverberating through your soul (depending on where you were seated, it was at times painfully loud, even with earplugs); and the lights, well… the lights were blinding.

And yet, there was some simplicity in the spectacle. The Weeknd had no costume changes, save for a mask that he removed between his second and third songs. The large screen placed behind the practical set served only to provide a background for the seemingly post-apocalyptic skyline. And the LED wristbands handed out at the door lit up the audience in the stadium during only a few songs, using fairly basic lighting patterns and effects compared to artists who popularized the accessories, such as Coldplay.

Tesfaye first rose to cult success with a series of free mixtapes and club shows. Even as one of the biggest pop stars, it seems The Weeknd hasn’t left his roots far behind. With no support band or backup vocalists visible to the audience, and several of the 29 songs he performed shortened to flow right into one another with no interruptions, the concert felt more like watching a mixtape theatrically come to life. The audience sang and danced to every song, seeming just as excited to hear his record-breaking “Blinding Lights” as they were for lesser-known tracks from his earlier albums, such as “Kiss Land.”

During one of his rare moments of banter with the audience, right before performing his final song of the night, with no encore to follow, Tesfaye looked to the future.

Andrew Roth is a reporter and photojournalist in Michigan covering politics, technology, culture and their intersection. Andrew has had bylines in news outlets like the Detroit News, Michigan Advance and Flint Beat. He was named one of the best political reporters in Michigan by the Washington Post and his work has been cited by outlets like Bloomberg, Endgadget, Daily Kos and others. You can follow him on Twitter at @RothTheReporter and @RothsReviews, and on Instagram at @RothTheReporter.

Billy Joel performs at Comerica Park on July 9, 2022.Andrew Roth. It was a pretty good crowd for a Saturday, and Billy Joel had Detroit feeling more than alright during his first ever solo stadium concert in the city July 9.

All Elite Wrestling owner Tony Khan in Detroit on June 29, 2022.Andrew Roth. All Elite Wrestling may have made their Detroit debut just last month, but Tony Khan, the company’s founder, co-owner, president and CEO, is already looking ahead to what the promotion could do next in the city.

Michigan voters will have the opportunity in November to vote to overhaul term limits placed on state legislators. Under the proposed reforms, lawmakers would be able to serve a total of 12 years in Lansing, down from the current 14-year term limit, but would be allowed to serve all 12 years in one chamber. Currently, legislators are limited to six years in the Michigan House of Representatives and eight years in the Michigan Senate.