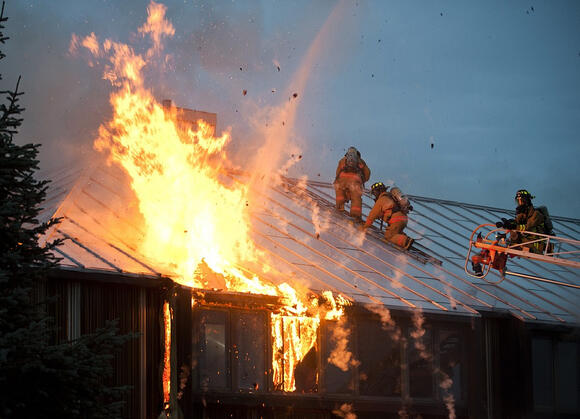 According to the Bristol Township’s fire marshal, the overnight fire was set intentionally at a home divided into three units.

The Firefighters units in Bristol managed to rescue one woman from a roof. A man jumped from a balcony located on the second story of the house because of the flames.

When were the firefighters called?

The units were called to intervene at 12:54 a.m. on Thursday. The address where the fire started was the 800 block of Main Avenue in Bristol Township.

What was the situation at the location?

On arriving there they discovered a fire that affected a house divided into three separate units. A woman had climbed on the roof through the window on the second story. She was brought down on a ladder by firefighters from Croydon Fire Company.

Unfortunately, a man was trapped by the fire and forced to jump from a second-floor balcony. He was treated at the location by paramedics from Bucks County Rescue Squad. After that he was taken to Jefferson Torresdale Hospital, where he needed to receive treatment for smoke inhalation and injuries from the fall.

Why did the fire start?

The fire has been ruled as an arson case. Detectives from the Bristol Township Police department have taken over the investigations and will work hard to trace the culprit.

What about smoke detectors?

Why was there no warning about the fire and how did it get to the point where people needed to jump from the house to protect their lives? Because there were no working smoke detectors in any of the three units.

It is very unfortunate to have a fire threatening to overtake a whole property and endanger human lives. If you have any information about who might have started it, or the reasons why please get in touch with the local authorities.

Let’s help each other and reduce the risk for all homes. Lives are at stake, damages, lawsuits, and injuries as well. And knowing the place you live in is safe is the most important consideration of all.

Woman treasures becoming a mom at 42: "I've been granted the chance to live two lives"

Amanda McCracken had her baby at 42. It was a choice she made for love because she found the right partner and felt that having a child together would be the happiest thing. As she puts it, it was about living, not about weighing pros and cons and even dreading possible risks.

Dog goes tandem paragliding with owner: "Ouka changed my life so much; we're happy together"

An experienced paraglider got an unforgettable surprise when he realized that his dog also had his eye set on the horizon. As time passed, the dog got more curious about the sky, and it didn't take long for the pair to begin paragliding safely together.

A man who lives in Minnesota wanted to experience a little taste of the past as he installed a functioning payphone right in his front yard. As it turns out, the novelty didn't just serve to make neighbors and bystanders smile. It also helped a little boy who got lost and used the old push-button to get back home.

Man treats stray cat to tasty meal from his store: "When she had a kitten, they came together"

A man who owns a meat shop in Turkey decided to offer scraps of meat to any stray animal that would come on his doorstep. His kindness and love for all animals made him known for a lot more than profits.

Mom uncovers treasure chest during beach cleanup: "I could easily have gone past it; I'm buzzing"

A mother of two had always hoped to stumble upon a hidden treasure, but she never imagined she would get to uncover it during a beach cleanup event. As she got involved in getting rid of all the trash littering the beach, she dug up a chest that had nothing to do with bottles or plastic.

Flight attendant falls in love after years of waiting: "No matter how complicated life is, open up and let love in"

Due to her job and needing to travel often, a flight attendant had given up on ever finding someone who understood how much she cared about her career. Just when she was sure there was no one out there who could be her partner, she met an engineer who had no issues with her travels.

Man travels to Alabama for treatment, invites entire city to his wedding: "Birmingham has become a part of my life"

A man who lives in Pakistan decided to travel all the way to Birmingham, Alabama, to receive treatment that wasn't available in his country. He made this choice after looking into alternative routes and options in different countries. In the end, he gave up on all locations that had too many restrictions and headed for Alabama.

Woman "raised by keepers" struggles with cleaning: "I grew up with the language of hoarding"

Sarah E. White was raised in a partially chaotic house. Her childhood memories are about uncertainty, anger, financial difficulties, and mostly a lot of stuff piled in every corner of the house.

Man overcomes homelessness, opens his barbershop: "Tattoos seemed to work for me"

A man who lives in Victoria, British Columbia, managed to open his own barbershop called after a musical he used to like in his childhood. The road to having his business was full of struggles as he had to deal with homelessness and kept trying to put an end to addiction.

Couple gets sandwiches, leaves highest tip in 20 years for waitress: "The kindness behind the money made my day"

A waitress had a stressful day after she had struggled to find a babysitter so she could come and work that day. Unfortunately, no one was available to help her, and she had to wait for her older daughter to get home.

Ring bearer, excited to see mom on wedding day, walks her down the aisle: "Hey, mom"

Kristie Mihelich decided to get married to the man she loved, and she included her little boy in the ceremony as the ring bearer. Her son was proud and so happy to be there for the wonderful location, but on seeing his mom show up all dressed in white, he just couldn't contain his excitement. He started running toward her for a huge hug and then made sure she arrived safely to meet the groom.

Woman gets locked outside, tries to convince cat to open door for her: "You can do it, try"

Bailey Rubal got locked outside the apartment she shared with her roommate, and there was no one else home except their cat. So, the woman sat down and kept tapping lightly on the doorknob and encouraging the cat. She knew the kitty could do it and the little noises coming from behind the door showed that the cat was trying his best to let her in.

Toddler orders 31 burgers, adds generous tip: "He had half of one; we gave the rest to our neighbors"

A little boy who lives in Kingsville, Texas, managed to have 31 burgers delivered to his doorstep. He got the burgers by accessing an app on his mom's phone, and he turned out to be a very thoughtful customer too. The toddler left the delivery driver a very generous tip.

Mom of 6 explains why love isn't always enough: "Don't tell someone who can't have kids to just adopt"

Tracy Whitney has six kids, including two children adopted from China. After her first four children, she knew she didn't want to give birth again, but that didn't mean her family couldn't grow.

Groom dances with mom, who can't walk: "She inspires me every day to be humble, kind, and selfless"

A groom wanted to share his happiness on his wedding day with his mom. Unfortunately, she is unable to walk, so she thought there was no chance of a mother-son wedding dance. With the help and love of her sons, the woman had an emotional dance and felt how much all her family treasures her.