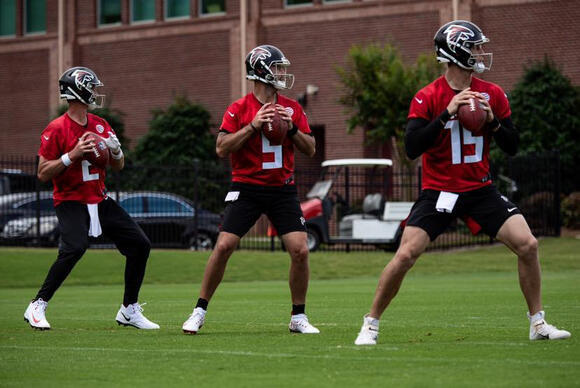 ATLANTA, GA — Julio Jones might have left the Falcons, but his wisdom will remain with the team. Some of the wisdom he imparted to Russell Gage is to “play fast”.

“Run. That was [Julio’s] biggest thing,” said Gage. “Speed off the ball and running. A lot of guys get too caught up thinking into their routes. Understand that even if you make a mistake, make it full speed. A receiver’s biggest asset is his speed. Whatever it is, you need to display it.”

Jones departure might have left a big hole in the team’s offense, but Gage and his teammates aren’t dwelling on that loss. Instead, they are set to understand Jones’ role and apply it to their games as a tribute to the star.

“Being on the same page as Matt [Ryan] and understanding what Arthur wants is big,” said Gage. “Those things come hand in hand. When you get to playing faster, it’s all because you are more comfortable, and you know, this is what they want out of me.”

Gage has increased his playing time in each of his previous seasons. He made an impression by catching seven passes on nine targets for 58 yards against the Seattle Seahawks. It wasn’t that Gage simply fitted in, though. His understanding and ability to play fast affect how he plays the game.

GWINNETT COUNTY, GA- Six Gwinnett County schools have been named grant recipients from Bosch Community Fund or BCF. They were chosen to receive this award based on their dedication as well as excellence in STEM education. This grant will be used to fund STEM-related projects.

GWINNETT COUNTY, GA- Georgia Department of Education or GaDOE has named Six Gwinnett County public schools as 2020-21 “Reward Schools”. This reward is Title I schools making the most progress in enhancing student performance.