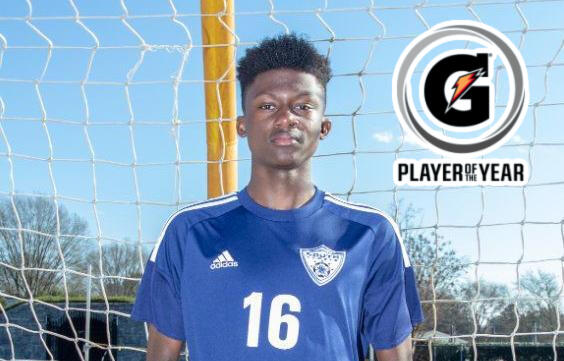 He is the first from South Gwinnett High School chosen as the 36th year of Gatorade Georgia Boys Soccer Player of the Year.

This award acknowledges outstanding athletic excellence, high standards of academic achievements, and exemplary character demonstration both on and off the field.

Kadeem Agard led the Comets to the AAAAAAA state semifinals with 43 goals and passed for 12 assists this past season as a senior forward. Agard scored seven goals and four assists in four postseason games and was selected the class Player of the Year.

As a two-time Gwinnett County Super 6 selection, he scored 14 multi-goal games and six hat tricks in his prep career.

“Kadeem is a special player,” said Lee Duggan, head coach of Grayson High. “He has size, speed and an instinctive ability to find the goal. He has been head and shoulders above his peers since his freshman year—a clear talent that developed and improved, year over year.”

In his school, this 6-foot, 155-pound player has kept his GPA at 3.61. This fall, he has signed a National Letter of Intent for a soccer scholarship at Mercer University.

Kadeem Agard now has the chance to give $1,000 to a local or national youth sports organization from Gatorade’s choice.