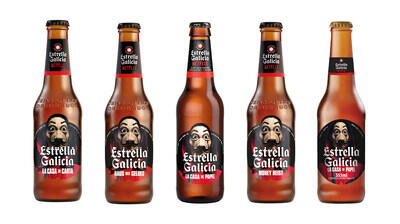 The premium Spanish beer brewery Estrella Galicia will dress its new special edition beer with labels inspired by the Netflix series La Casa de Papel (Money Heist), which has captivated audiences all over the world.

85 million bottles of Estrella Galicia with the image of the Salvador Dali mask will reach the brand's international market in the coming days. The exclusive La Casa de Papel (Money Heist) version will be available to customers in 60 countries worldwide that include places like Turkey, Russia, Morocco, Mexico and Singapore.

With over a century of history that embraces the shared values of "La Resistencia" or "The Resistance Continues" with the Netflix series, Estrella Galicia's La Casa de Papel inspired beer will be hitting the market and reaching the hands of fans worldwide before the premiere of volume 2 of part 5 on December 3 on Netflix.

Santiago Miguélez, Marketing Director of Hijos de Rivera, points out: "Estrella Galicia has lived the success of the Netflix series as our own. The integration of the brand has been on a large scale and the fans of La Casa de Papel (Money Heist) have fully identified with the values of La Resistencia, the motto of our brand."

This action is another step forward in Estrella Galicia's reputation and worldwide positioning strategy, which includes the deployment of powerful differentiating ideas such as this Netflix's special edition beer that pays tribute to La Casa de Papel (Money Heist).

Batman standing under steel roofSerge Kutuzov/Unsplash. Today at DC FanDome, a free virtual DC fan event, Little Caesars announced that they will be looking for cast members for their next commercial entirely on TikTok.

Harry Potter and the Sorcerer's StoneWizarding World. The Sorting Hat is a magical hat introduced by Godric Gryffindor that is used to place Hogwarts students in their rightful place, depending on their qualities and capabilities.