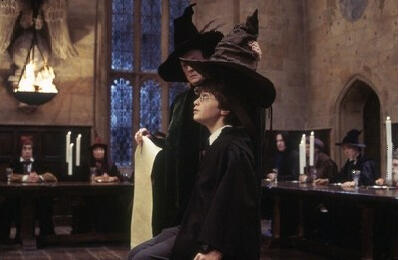 The Sorting Hat is a magical hat introduced by Godric Gryffindor that is used to place Hogwarts students in their rightful place, depending on their qualities and capabilities.

From the moment Harry sat beneath the magical Sorting Hat on his first day at Hogwarts muttering 'not Slytherin, not Slytherin', fans have clamored to be Sorted themselves.

In celebration of the first film's 20th Anniversary, Wizarding World invited everyone to share their house pride. The Official Sorting Ceremony takes place on Wizarding World and the Harry Potter Fan Club app.

Gryffindors all throughout the world will be happy to learn that Bonnie Wright, who played Harry's future love interest Ginny Weasley, and Alfred Enoch, who played Dean Thomas, have both been sorted into Gryffindor—staying true to their characters.

While Tonks actress Natalia Tena also found herself in Hufflepuff after participating in the virtual Sorting Hat. She joined her fellow house members known for their hard work and loyalty.

The Wizarding World continues to provide fans of all ages with a variety of ways to engage with the 20th anniversary celebration of  the Harry Potter and the Sorcerer's Stone film as new exclusive content focused on 20 Magical Moments from the first film will be released every Wizarding Wednesday on WizardingWorld.com—including games, quizzes and secrets from the crew who brought it to life.

Batman standing under steel roofSerge Kutuzov/Unsplash. Today at DC FanDome, a free virtual DC fan event, Little Caesars announced that they will be looking for cast members for their next commercial entirely on TikTok.