Multicultural lifestyle content creator focusing on Food, Travel, Tampa Bay, living life with the Spirit of Aloha, and striving to transfer that sentiment to readers. 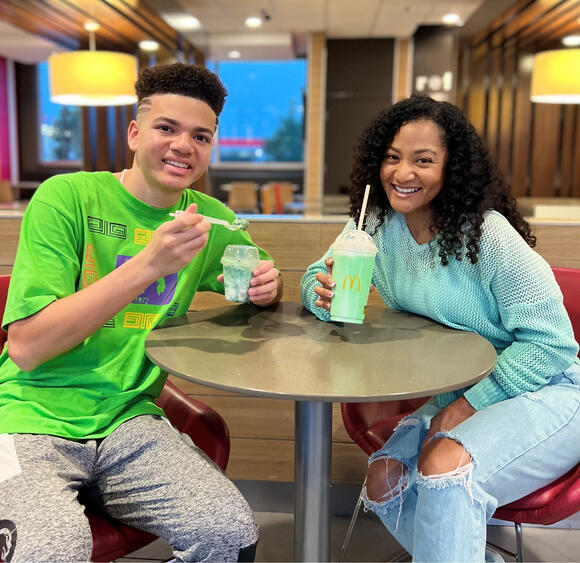 The Shamrock Shake® along with the OREO® Shamrock McFlurry® has returned in time for Saint Patricks Day with a sweet bonus!

The Shamrock Shake® returned to McDonald’s menus on February 21st in time for Saint Patrick’s Day and are available for a limited time at participating restaurants nationwide. A portion of the proceeds will benefit the Ronald McDonald House in Pensacola, Florida!

As with every limited-time offer from McDonald's the Shamrock Shake® return has been a coveted event every year for McDonald's fans. The release of the OREO® Shamrock McFlurry® in 2020 added to the Shamrock Season craze.

The OREO® Shamrock McFlurry – the perfect combo of vanilla soft serve with our Shamrock Shake flavor and OREO® cookie pieces. This menu item first debuted in the U.S. during 2020 Shamrock Shake SZN, and now it’s back by popular demand.

I personally have an affinity for the Ronald McDonald House of NW Florida. When I was a senior at the University of West Florida, I was elected to be the Vice President of Community Service of the Eta Upsilon chapter of Delta Sigma Pi. One of my projects was having our chapter volunteer at the Pensacola Ronald McDonald House. ~ Aloha Melani

Our philosophy is simple – nothing else should matter when a family is focused on healing their child – not where they can afford to stay, where they will get their next meal or where they will lay their head at night to rest. That’s why Ronald McDonald House Charities of Northwest Florida strives to be the best home-away-from-home for families who travel to Pensacola to receive critical medical treatment for their children. Since opening in 1984 with a six-bedroom house through growing to our current 26-bedroom facility in 2010, we have served over 10,000 families. ~Ronald McDonald House of NW Florida mission statement

Color of the SZN

Shamrock Shake fans have been repping the season with mint green manicures and Shamrock-inspired gear. For the first time ever, McDonald’s is also sharing the official color code of the Shake to help fans celebrate.

After over 50 years McDonald's is sharing the hex code to help Shamrockers across the country go green to show their love for this delicious dessert!

That’s the hex code for the unmistakably minty color of Shamrock SZN.

Multicultural lifestyle content creator focusing on Food, Travel, Tampa Bay, living life with the Spirit of Aloha, and striving to transfer that sentiment to readers.

A Partnership with Local Businesses and Influencers to Feed the Hungry is a Now a Holiday Tradition. Billy's Food Run For the Homeless December 2021(Connor Wright / @thatconnorgurl)

Bubba's 33 Opens its 2nd Tampa Area Restaurant in a Flash

AlohaMelani at Cookie Munchers Tampa with Double Chocolate Chip Cookie(Melani Rivera/Aloha Melani) Cookie Establishments Near USF Stay Open for Those Late Night Cram Sessions!. If you are lucky enough to be a college student at the University of South Florida you may fall victim to one of two establishments too close to your dorm! Both cookie concepts were dreamt up out of college dorm rooms, so the entrepreneurs understand the sentiment behind late-night cookie cravings.

Fourth Friday Tampa is Back This Week

Nikki Fried is Doing What is Necessary When the Governor Won't

Florida Vegan Gourmet Food Fest is Back This Weekend!

Finally a Bill on "The Hill" to Support Uterine Fibroid Research, Period.

Tampa, Florida was the backdrop for the Highly-Anticipated Annual Issue of Sports Illustrated that Hits Stands Tomorrow, July 20, 2021. Yu Tsai, one of the most sought-after fashion and celebrity photographers in the world shot two of the three history-making covers for this year's Sports Illustrated Swimsuit Edition. One of those covers was photographed in Tampa, Florida.

A recent USF Survey uncovered some Vaccine Hesitancy factors in Florida. Any hope in flipping the "Wait and See" group?. Researchers at the University of South Florida in Tampa, Florida conducted a statewide survey of 600 Floridians to better understand the factors associated with vaccine hesitancy.

Clear Kayak Tour of Shell Key Preserve and Tampa Bay Area is the No. 1 Experience in the U.S.