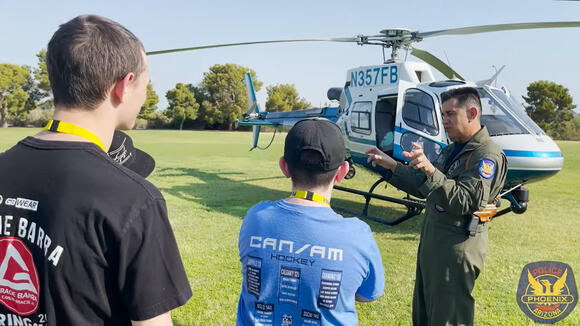 PHOENIX, AZ — Several seventh and eighth-grade students are joining the Phoenix Police Youth Experience— a week-long summer program that gives kids an insight into the criminal justice system and the world of law enforcement.

“Most people, when they see a cop, are like ‘oh, no a cop, something bad is going to happen,’” Andrew, a program attendee, said. “But really, they’re just trying to help, and I think it’s important to like actually experience what they’re doing, and just kind of like know them.”

Every day of the week, these kids are encountering various parts of the department. The K9 unit brought their dogs while the air unit landed a helicopter.

The kids also got the chance to participate in a community service project, as well as a mock trial.

“Yesterday we did an ethics class and that was very important because some of the kids didn’t know what that was,” Colin, another program attendee, said. “And so they got ethics explained. And it’s very important to have a good moral compass. And good ethics.”

Ben Harris is one of the Phoenix Police Department’s community action officers who is helping to make this week a success. He claims that today’s kids learn a great deal from their screens. This week, the kids are getting hands-on with things by participating and asking questions, which gives them a unique point of view.

“They’ve had one perception of what police work is, and what the criminal justice system is, and that’s come from what they consume—social media and some television,” Officer Harris explained. “And so they didn’t know about everything else.”

As much as this week is about showing kids all parts of police work along with the criminal justice system, Community Action Officer Mary Roestenberg said it is about creating conversations, as well.

“I receive emails from the parents [saying] ‘hey, my child came home, we actually had a conversation today, we talked about what you guys did, and they’re so excited about coming back,’” Officer Roestenberg said.

According to Foundation President Tim Thomas, community policing is at the heart of the program, as is creating those ties early on.

“A lot of times, your first encounter with law enforcement is an enforcement type situation which isn’t the best time for you to learn about law enforcement or to be an officer,” Thomas explained. “So this provides an opportunity for really these young adults to have a great understanding of law enforcement and that these are people behind that badge.”