A dangerous invasive species of giant lizard in Florida 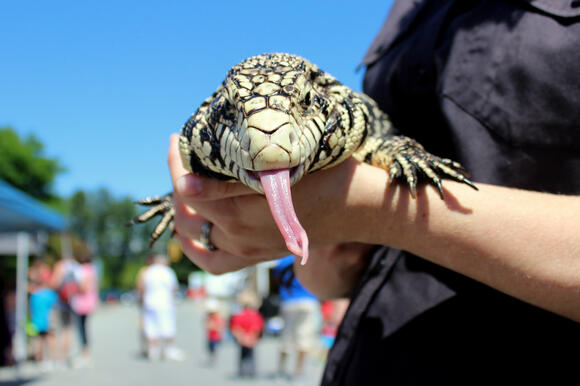 Some very interesting animals are roaming in our world, one of which is this dog-sized lizard that has become an internet sensation.

Florida has an invasive reptile problem, and it's not just the Burmese python but also a giant lizard.

The Argentina black and white tegu, a giant lizard growing up to four feet in length, has already increased widely throughout south Florida.

Tegus are native to Argentina and are known for their white and black spotted skin. They are omnivorous lizards and frequently four feet long.

If tegu is established, they will consume a wide variety of foods, including fruits, vegetables, birds, and reptiles—additionally, they like eggs, which raises questions about the survival of nearby animals like turtles.

A biologist with the U.S. Geological Survey, Amy Yackel Adams, said that the lizards were first brought to the U.S. as pets. However, as some escaped or were released into the wild, they began to spread. Now experts say it's becoming a problem, as they can be particularly dangerous to endangered species in the area.

According to National Geographic, the spread is difficult to control once established in an area.

In addition, because they are resourceful and elusive, preventing or reducing their spread is difficult after the species has been established. Female tegus release 30 eggs each year and can live for 15 to 20 years.

The lizard loves subtropical environments with high rainfall, so it picked the southeastern United States to invade. The tegu population may also grow as this weather pattern moves northward due to climate change.

What do you think about it? Give your valuable opinion in the comment section, and if you think more people should read this article, share it on social media and with your friends and family.

Meet a miracle baby boy who was born without skin stunned the internet. His condition was so unusual that his own mother thought he looked like a "piece of uncooked meat". The newborn baby boy name (Kaiden Jake Shattock) was born ten weeks premature at Nottingham City Hospital.

Scientists found going to bed before 9 p.m. has a 70% higher risk of developing dementia.

In a recent study, scientists found early sleeping had a 70% higher risk of developing dementia. Sleep may impact both physical and mental health and has been linked to various health conditions such as heart disease, stroke, dementia, depression, and obesity.

The untold story of the first black millionaire of Florida.

As we all know, black wealth-building seems to be a forever trending topic, so today, we will discuss the story of the first black man who became a millionaire. Meet Dana Albert Dorsey, the man who reportedly goes down in history as Florida's first black millionaire in America in the late 1900s.

As we all know, there is no dought Colorado is one of the most beautiful states in America because of its beautiful natural scenery, historical town, lively cities, and many more iconic spots.

In Ohio, there are many activities to enjoy throughout the months of September and October, including crisp fall air, apple and pumpkin farms, crunching leaves, and the best fall festivals.

As we all know, Americans already suffer a lot due to very high inflation because food prices are already soaring in which eggs are marking the highest price ever recorded in the past decade.

Meet another internet sensation, the black couple who gave birth to a white baby

"One of the weirdest cases is come up of the black couple who gave birth to a white baby." The couple was black but gave birth to a perfectly healthy white baby. The newborn baby did not look like Ben, Angela Ihegboro (Father), or their other two children.

A recent study published in Current Developments in Nutrition (CDN) found that drinking just one soft drink per day had a 73% higher risk of developing liver cancer. The University of South Carolina led this research, where they examined data from 90,000 postmenopausal women who participated in the Women's Health Initiative. A long-term study started in the early 1990s was analyzed for the current study.

A Dangerous Species of Lovebugs Coming Again in Florida

Florida residents enjoy the warm weather, the beaches, and the swimming poles, but Floridians hate the season when the lovebugs are out in full force. According to bug specialists, the bugs boarded a ship from Central America to Texas in the mid-1920s. The invasion then spread along the Gulf of Mexico, where the heat and humidity were ideal, and they arrived in Florida by the 1940s.

New part of the human body found inside lungs

All the women would agree that giving birth is one of the most painful experiences in women's lives, and it may happen to anybody. The miracle of life is joyful, unless when it isn't, so imagine having to give birth to a toddler-sized infant.

Man claims to be Jesus Christ living in Australia

2 best cities to live in Florida

As we all know, Florida is one of the best places to live in the United States because of its beautiful beaches, warm and sunny climate, natural beauty, many tourist attractions, and no state income tax.

A woman tells what life lesson Jesus taught her when she was dead for some time.

A woman named Betty Eadie shared her experience about how she met Jesus Christ and what life lessons Jesus taught her. Betty Eadie had a near-death experience in 1973 during her partial hysterectomy surgery when she was 31.

As we all know, living in rat-infested cities is a horrific experience for ordinary citizens because they can infect humans directly with various diseases. According to experts, a single female rat can give birth to 6 to 12 babies at once, and a breeding pair of rats can produce 15,000 offspring in one year.

Stimulus payments worth up to $2,000 are coming for millions of Florida residents because residents faced one of the worst inflation increases in the previous 40%. According to experts in June, consumer prices increased 9.1% over the previous year, higher than economists' predictions of an 8.8% increase.

According to a new study, people who cannot stand on one foot for 10 seconds have a more than 80% chance of dying within a decade. A study published in the British Journal of Sports Medicine showed that a person's ability to maintain balance could last into the sixth decade. This means that balance is a more universally helpful indicator of life expectancy than aerobic fitness, flexibility, or muscle strength.

Why do 90% of smokers not get lung cancer? Finally, scientists gave an answer

90% of lifelong smokers do not get lung cancer /Pawel Czerwinski. In the United States, approximately 90% of lung cancer deaths are responsible by tobacco products, with cigarette smoking being the number one leading cause of lung cancer.