I explore California geology, history, and archaeology - pretty much anything about the past in the Golden State!

The 1906 Earthquake and fire leveled San Francisco in one of the worst natural disasters in American history. By its end over 3000 people had died, 80% of the city had been destroyed, and several hundred thousand people were homeless. The cause of the earthquake was a sudden movement along the San Andreas Fault, which has become notoriously linked to San Francisco.

But did you know that the fault doesn’t actually go through San Francisco? To find the San Andreas you need to head to Daly City and the suburbs south of San Francisco where you can see it up close.

What better place to see the San Andreas Fault than San Andreas Lake! Park at the Sawyer Camp Trailhead (https://goo.gl/maps/fkQqRPvKD3Cg274H7) and walk a mile down to the dam - you're now standing on top of the San Andreas Fault! Look to the south and notice how linear the valley is - the valley is so straight because it is the fault. You also are standing on a divide between two tectonic plates. While looking north across the lake, the hills to the left are the Pacific Plate and the hills on the right are the North American Plate.

The San Andreas Fault is a strike-slip fault, meaning that two bodies of rock move sideways along each other instead of up or down. Its type of movement is right-lateral, so each block moves to the right relative to the other. Because the San Andreas is right-lateral, land on the Pacific Plate is moving north and land on the North American Plate is moving south; it's for this reason that some people say one day LA will be right next to San Francisco!

When you walk along the path to the beach, look up and to your right - you can clearly see the landslide caused by and covering the San Andreas Fault. The steep cliffs at the top of the hill are the scarp of the landslide: where the hill broke when the land moved. The slump of soil below the scarp is the slide body: the block of land that was once attached to the top, but has since moved downward through a landslide.

Again, this landslide wouldn't be here if it weren't for the San Andreas Fault - years of earthquakes at this location have weakened the surrounding rock and make it particularly vulnerable to landslides. On your way back notice all of the homes at the top of the cliff - situated right on top of the San Andreas Fault and a large landslide! Despite the view I wouldn't want to live here!

The closest you can get to the epicenter of the 1906 earthquake without getting wet is at Ocean Beach near the intersection of Great Highway and Pacheco Street (https://goo.gl/maps/ubuDwskRVm4yx4m26). The 1906 magnitude 7.9 earthquake was probably centered about two miles west of this point in about 20 feet of water. That location was the earthquake's epicenter, the point at the surface closest to where the earthquake occurred.

The hypocenter, or the point underground where the earthquake occurred, was about 5 miles down into the earth. When the 1906 earthquake happened the rock on the Pacific Plate moved about 15 feet north of rock on the other side of the fault almost all at once. Imagine all the energy it would take to move a tectonic plate, including miles of rock under the surface 15 feet all at once. That is the energy that was released upon the people of San Francisco and it’s why so much was destroyed.

So much of the city was rebuilt that it’s hard to find evidence of the earthquake’s destruction. However, earthquake ruins can be found in one of San Francisco’s top attractions, Golden Gate Park (https://goo.gl/maps/yFDNnwMzgzxgqrwf9). At the top of Strawberry Hill is a ring of concrete rubble that was once the Sweeny Observatory, a large castle-like structure built in 1891. It wasn't an astronomical observatory and was more of a lookout point/place where your great-great-grandparents made out.

Like so many other buildings from 1906, it did not survive the earthquake. You can still see the large red concrete foundations of the observatory overgrown with trees on the west side of Strawberry Hill and the empty basin of what was once a pond on the east side. Some large chunks of the observatory are eroding down the hill on the north side. 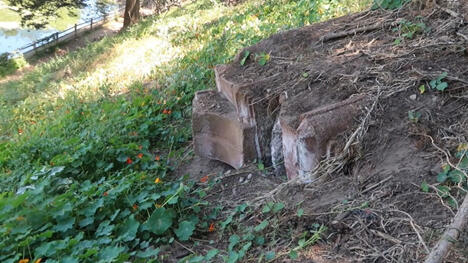 I explore California geology, history, and archaeology - pretty much anything about the past in the Golden State!

Lompoc Local History: The Chumash Revolt and the Battle of La Purisima

Did you know that nearly 200 years ago a battle took place in what is now the quiet, central coast town of Lompoc, California? On March 16, 1824, musket fire, cannons, and cavalry raged for over two hours as 500 Chumash warriors and Mexican soldiers fought for control of La Purisima Mission in northeast Lompoc. By the end of the day 17 people were dead, many more were wounded, and Mexican authorities regained control of the mission. But this event was just the peak of a larger movement that lasted for months, involved three different missions and multiple California Indian tribes, and ended up being the largest and most successful uprising in California’s mission history.

3 Reasons Why California Is Always on Fire

If you've ever been to the Marin Headlands you know that it is one of the most beautiful spots in the Bay, but did you know that its hills are the result of 200 million years of volcanoes, earthquakes, and fossilized plankton?

Learn how Tomales Bay is shaped by the San Andreas Fault!

Did you know that the state park isn't the site of the first mission in Lompoc? Its ruins can be found off F street in town.

Did you know that the mission was originally located further inland at a different site?

Almost nothing remains of the original San Rafael Mission - using historical documents this video explores where the mission would have been and how much has changed in San Rafael.

Learn how Lompoc's beautiful surroundings are a result of its spectacular geologic history.

The Battle of La Purisima

Did you know that the largest mission revolt in California history happened right here in Lompoc?

Did you know that Bodega Bay was created by the San Andreas Fault?

Here's why the ground under your feet in south OC is so unstable!

Learn how the incredible beauty of Laguna Beach is mostly because of its spectacular geology!

A virtual geology field trip of Bolinas Bay and Stinson Beach. Be careful when you're at the beach - you're on top of the San Andreas Fault!