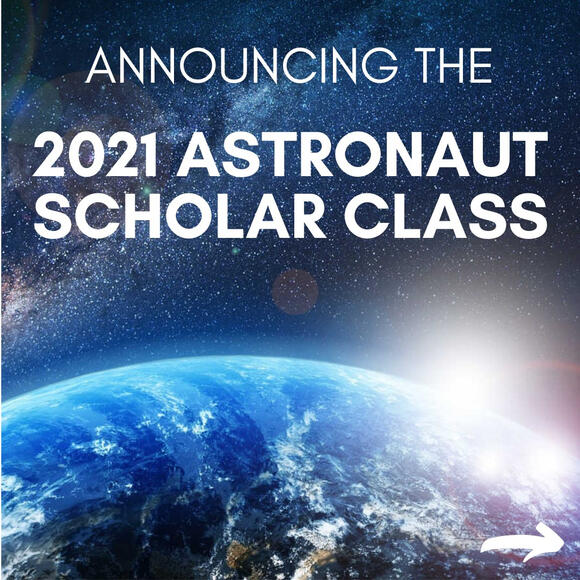 MINNEAPOLIS-ST. PAUL, MN — Two University of Minnesota Twin Cities students have been awarded scholarships for the 2021-22 academic year by the Astronaut Scholarship Foundation among 60 other students across the United States.

The Mercury-7 astronauts created the distinguished Astronaut Scholarship, which is awarded annually to reward chosen sophomores and juniors who intend to pursue research-oriented careers in STEM fields, focusing on mathematics, engineering, and the natural and applied sciences.

The scholarship awards up to $15,000 for a year of undergraduate study. The recipients will also receive professional development support and mentoring, attend the Astronaut Foundation’s Innovators Gala in Orlando, Florida and have the opportunity to participate in other Astronaut Foundation events.

The first student is Sauviz Alaei, a Math and Physics major from Eagan who has been working for two years in the condensed matter physics lab of Professor Dan Dahlberg. In his first project, Alaei created an apparatus to measure the frequency response of a new magnetostrictive material developed in the lab.

The resulting data revealed some surprising new material qualities, which behaved in unexpected ways at low frequencies. Alaei presented his findings at the American Physical Society’s 2021 meeting and will publish them in a forthcoming issue of the Journal of Applied Physics.

He currently serves as the vice president of the University of Minnesota Twin Cities Society of Physics Students. He has helped implement a new mentoring program and other pandemic-related initiatives that have helped triple the membership. He has also served as a tutor for Honor Physics courses since he is a member of the University Honors Program.

The second student is Nathan Pharis, an Aerospace Engineering major from Chanhassen who has been active in several projects in aerospace research, primarily working with Professors Graham Candler and James Flaten on employing high-altitude balloons to measure particulates in the stratosphere.

Pharis assessed innovative techniques for collecting samples from the low-density air in the upper atmosphere when he was creating a payload for NASA’s High Altitude Student Platform. He has been the main contributor and developer of the control systems to maneuver balloons and execute data gathering.

Pharis is currently the vice president of the American Institute for Aeronautics and Astronautics group and a member of the University Rocket Team. In the future, he is planning to earn a Ph.D. in Aerospace Control Systems.

For more information on the Astronaut Scholarship, visit astronautscholarship.org.

Discover the Community and Organizations in Aurora

AURORA, MN - If a city has a good and orderly administration system, it will be a livable city. The existence of communities formed by citizens under the auspices of the local government will boost the city's attractiveness.

ST. PAUL, MN - This five-year program, which ended in July 2020, is intended to address a wide range of variables that lead to the increased infant mortality rate among U.S.-born African Americans residing in Hennepin County. There are more African Americans in Hennepin County than in any other county in Minnesota. Their infant mortality rate is 3.4 times greater than that of whites.