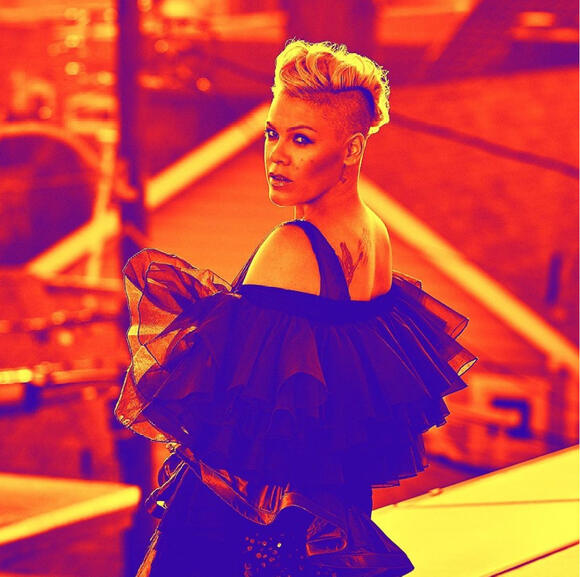 Pop star Pink has clearly shown how she feels about the anti-abortion movement by asking its supporters to never listen to her music. She sent out a passionate tweet after the overturning of Roe v. Wade, voicing her opinion.

She wrote, “Let's be clear: if you believe the government belongs in a woman's uterus, a gay persons business or marriage, or that racism is okay,”. Then she continued in all caps and asked them not to listen to her music again.

The singer’s tweet caught a lot of attention with thousands of comments - some are supporting her, while others are criticizing her. But she replied to quite a few of the hate tweets.

One of the tweets got so much attention because it was made by the comedian Spencer Rice from the Kenny vs. Spenny show. He tweeted, “I hope her agent survives the stroke.” To that, Pink replied, “I am my agent. We're fine."

However, things got out of hand when Pink’s fans sent angry messages on Twitter. To clarify that his tweet was a joke, he posted a video. After that, he replied to Pink again, telling her that her fans really have her back. She responded to his comment and asked her fans to leave him.

She expressed her thoughts on the Supreme Court’s decision on Sunday. “I think all of our nerves are collectively fried from so many years of racism, misogyny, homophobia, etc. +pandemics, mass shootings, wars, and the total lunacy, hypocrisy, ignorance of the GOP-it's all a bit much. But we will stick together. Good will prevail over evil."

She continued, “And to all of you sad, old white men asking me if I still make music. I realize you're out of touch- so ask your kids.... Oh wait- you can't. They hate you.”

All this retaliation is against the Supreme Court’s action of upholding the Mississippi's Gestational Age Act, which banned abortions for all pregnancies after the 15th week, with exceptions for medical emergencies or fetal abnormalities.

A mother of four disclosed to her children that Santa is not real as she cannot afford to buy presents for them. With four children under ten, Rachel from Scotland pays her bills using a ‘bill roulette’ system amid the cost-of-living crisis.

Dad hides sister from daughter for decades but family finds out

Sarah and her husband with her sister;Photo byFacebook. Sarah Leibov was 24 years old when her mom called her with a surprising news - her dad had a secret daughter. Her mother wasn’t shaken by the truth because they divorced 20 years ago. Instead, she had a ‘strange, nervous excitement’ in her voice.

A Pampered Toddler is Getting $3075 Worth of Presents for Christmas

A pampered toddler gets Christmas presents worth $3075 from his dear mother. Kasey Akram, a 33-year-old mother, loves spoiling her two-year-old son, Jareem Akram, with gifts. She wants to buy the boy 100 presents for Christmas, which could be worth over $3,000, this year. In fact, at the tender of two, Jareem was given expensive gifts like Gucci shoes and a $1230 solid gold dummy.

Christian landlord rejects couple's application because they are 'unmarried'

A woman was surprised when she caught an elderly lady clicking a picture of her from a selfie she clicked of herself. Eliza Rose Watson, a 31-year-old British model, accidentally caught an elderly lady taking a picture of her from her screenshot. The model was sunbathing on the beach and clicked a selfie of herself to send to a friend. But when she zoomed the picture, she found someone lurking in the background with their phone pointed in her direction.

A man has revealed that he skips hot meals and washing hair to feed his pet cats after the cost of living increased. Colin Ortutai-Hughes, a 45-year-old man, who lives in Brent, North West London, has recently shared his battle with the cost of living crisis. He says he struggles to feed himself and his lovely pets.

A mom-of-five has admitted that she charges her children and grandchildren for Christmas dinner. Caroline Duddridge, a 63-year-old woman, started charging for Christmas dinner after she noticed it was draining her income. She charges up to $18 for adults, $6 for her 12-year-old and 9-year-old grandkids, and $3 for her two 3-year-old grandchildren. The adult women attending the dinner have lower charges because they have families and work part-time jobs.

A woman, a body art enthusiast, was surprised after seeing her new tattoo, a poorly executed knife on her hand. Malana, a 23-year-old woman, was extremely disappointed when her recent knife tattoo backfired. She shared a video in TikTok under the username @malyev that the tattoo had wobbly lines and multiple blowouts.

A woman passed away six days after being diagnosed with brain cancer and on her daughter’s 12th birthday. Ellen Louise Francis, a mom of five, died six days after being diagnosed with terminal cancer and on the 12th birthday of her daughter, Donna Marie. In addition to having their first Christmas without their 35-year-old mother, the family also emptied their savings during the funeral.

Teacher, 28, who quit her job to become stay-at-home girlfriend says her next aim is to get married and have children

A woman quit her school job as a teacher to be a stay-at-home girlfriend of her rich boyfriend. Summer Hawkins, a 28-year-old teacher living in Bristol, England, was stressed and unhappy with her work life. Despite all the effort she put into her work, she got only enough money to cover her expensive rent.

Flight attendants of Delta Airlines threaten a wheelchair passenger that TSA (Transportation Security Administration) will deboard him off the plane with guns. Cory Lee, an award-winning travel blogger, was looking forward to deplaning after a long flight from Santiago, Chile, to Atlanta, Georgia on November 13th.

A 30-year-old woman has revealed that she and her partner, a 60-year-old man, got called ‘gross’ for having a baby together. Mindy Milka, a young Youtuber with over 265K subscribers, wasn’t ready for the number of hateful messages she received after announcing the news of her expectations. Some of her viewers pointed out that her husband, Larry, was ‘too old to be a dad’.

A woman says she is going mad after a neighbor installed a 6ft tall fence blocking her view of the street. She is devastated as the council also refused to help. A 75-year-old woman, Sheila Parkinson, can see only the tops of houses when she walks out onto the driveway. She claims she would have gone mad at the constant sight of the 6 ft fence if it weren’t for her friends and daughter.

A mom of 12 has opened up about her desire to have five more kids despite trolls asking her to get sterilized. A TikToker with user ID @clutteredmother shares videos of her large family regularly but often faces backlash for her having 12 kids. In fact, trolls even ask her to get sterilized or seek psychiatric help. Despite this, she wants five more babies.

A mom spoke up against a sign placed outside an estate’s play area banning children who don’t live there from using it. When Becca Martin took her four-year-old son, Charlie, to a private playground, she found a sign saying only children living in the estate were allowed there. She was shocked and angry after visiting the playground on the Fairways Estate off Holt Road, Wrexham, where the sign was put up to greet them.

A homeless man passed away after making a final bed for his beloved dog a few nights before Christmas in 2021. Jonathan Ellerington, a 41-year-old man, was a regular face in Hull city center as he and his pet dog, Teddy, were well-acquainted with shoppers and workers. Unfortunately, he passed away a few days before Christmas last year. He could be seen going into a slump and losing consciousness after he made a bed for his dog.

Mom Dies of a 'Broken Heart' After Finding Her Son, 34, Dead

A woman claims she has a new ‘glow up’ and has transformed from ‘Karen’ to ‘Megan Fox’ after her divorce. Marissa Pool, a 29-year-old woman, shares that she ‘lost herself’ by thinking she had to dress and present herself in a certain way to be a good wife and mother.