What are Cambodian 'Penis Plants' that are nearly extinct? 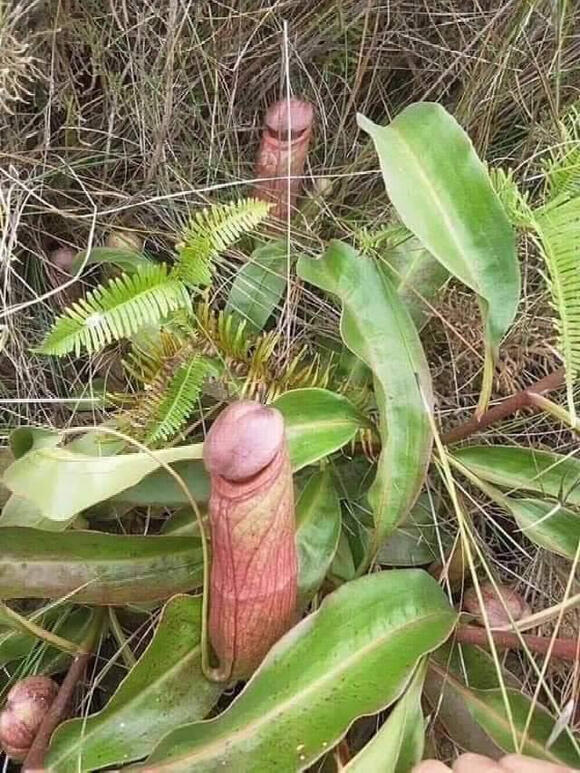 Native to the tropical parts of West Cambodia, these rare 'Penis Plants' are on the verge of extinction due to the increase in agricultural activities and tourism. This plant is known by that name for its uncanny resemblance to the phallic shape of the male genitalia when seen from a particular angle. It's scientifically named 'Nepenthes holdenii' because some photos of women posing and plucking the plant went viral on the internet.

The Cambodian Government has urged the citizens and tourists not to pluck this rare plant. This news was reported by Khmer Times, after which the Cambodian Ministry of Environment shared the images on their Facebook page of women posing and plucking these pitcher plants stating, "Thank you for loving natural resources, but don’t harvest, so it goes to waste!"

Though they have no problem with tourists clicking pictures of this rare plant, they have requested them not to pluck the plant.

These carnivorous plants are known for their ability to survive in low-nutrient soil. They depend on insects to fulfill their nutritional requirements by using sweet nectar.

The insects get attracted to the sweet nectar and fall into the trap. Once they enter inside, they cannot come out as they get coated with the digestive juices of the plant. In this process, the plant gets its share of nutrients.

Though they appear funny, it has become a matter of concern as this rare plant is close to becoming extinct. According to freelance Wildlife photographer Jeremy Holden, this is closely related to a species dubbed Nepenthes bokorenis. They appear quite similar and are found in the same tropical region, but only a few botanists can differentiate between the two varieties. It has thus become important to save this rare pitcher plant from becoming extinct by being more responsible towards the environment.

Man emails his ex, saying their breakup daunts him, a day before his wedding

What if one can’t get over their ex even when they’re getting married?. Erasing feelings and memories connected to an ex can be hard, especially when you still care for them. Some love their ex months or years after their breakup.

“I didn't want to bring her with me, but what was I supposed to do?” Wife heartbroken after overhearing husband's words

Is it right to exclude one’s wife from family vacations?. Vacations are great opportunities for family members to bond and create memories. Also, those who go on family vacations tend to be more return relaxed and happier.

Step-sister makes woman homeless at the peak of her pregnancy

Babies depend on their parents during the first few months after birth and don’t necessarily require a room for themselves. In fact, according to experts, it's best to have a baby share a room with its parents initially but sleep in a different bed or cradle.

Weddings are huge affairs that require careful planning and attending to the needs of different types of guests. One of the most important and stressful parts of wedding planning is deciding the menu.

Man furious at girlfriend for baking food his mother won't like

“I paid for your ticket! Isn’t that enough?” Man furious after wife refused to fly in economy

Should unemployed wives get the same treatment as their employed husbands?. A stay-at-home mother contributes to society by raising its future generation to be responsible citizens. From a family point of view, they look after the needs of the family, cook food, maintain a clean house, and so on.

Pregnancy cravings are sudden urges to eat a particular food. These cravings happen due to hormonal and sensory changes and ensure that the pregnant woman gets enough nutrition.

Being a single mother is hard as they will have to provide and care for the child themselves. They can feel lonely and stressed and experience financial issues. But more than 80% of single-parent households are run by single mothers, and 18.4% of them are either separated or widowed.

Man complains about how having a baby sabotaged his life

One should decide to have a baby only after understanding the changes it would bring to one’s life. Although parenting is a joyous experience, it can often be overwhelming. Caring for a child and attending to their many needs can be physically exhausting.

Is it the aunt’s or uncle’s responsibility to babysit during their vacation?. Spending time with kids can wear out an introvert due to overstimulation from kids, who are usually highly energetic and loud. If they do babysit, introverts require some alone time to recharge regularly.

A Reddit post about a man who refuses to let his girlfriend attend her sister’s wedding without his children went viral with over 15,900 upvotes and 5,000 comments. The author starts the post by saying that she has been dating John, a single dad to three boys, for two years. She explains that he had his first son with his late wife and second and third with his ex-girlfriend, who isn’t in the picture anymore. She adds that John’s first son didn’t bond well with his half-brothers.

A recent Reddit post about a man who was having dinner with his girlfriend’s family went viral with over 24K upvotes and 1.5K comments. His girlfriend’s family took pride in their Italian ancestry and kept making jokes at his expense. The post was also published in Newsweek by Ashley Gale on 29th July 2022.

Woman leaves nephew unattended for 4 hours because she doesn't babysit

How should one react when their significant other doesn’t understand one’s emotions after miscarriage?. Losing a child can leave a person broken. People going through this situation might experience grief, shock, guilt and failure, emptiness, jealousy, and loss of control. Some of them have even reported having lost trust in their bodies.

Woman uninvites parents from wedding because they gave up her room

Is it right to uninvite one’s parents to their wedding over disagreements?. Usually, ‘difficult people’ have less empathy and are highly critical, making it hard to grow a smooth and healthy relationship with them. Such people may also belittle others, insist everything happens their way, and can’t regulate their emotions.

Should one show hatred towards a person for having different likes?. People who enforce their ideologies on others can drain those with them. It can make people think the person trying to impose their ideas doesn't respect or care about their ideas.

Teenage is a tricky phase of life where children find their identities, undergo body changes and hormone surges, develop a sense of independence, and more. Some teenagers might engage in illegal (for their age) activities. Therefore, parents might have to observe their teenagers to guide them correctly.

Woman refuses to let 9-year-old nephew at her wedding

A wedding is a precious event in a couple’s life, and they try their best to make it perfect. However, noisy children can cause inconvenience to others at a wedding and ruin the couple’s day.

How should one react when their mother-in-law disrespects them publicly?. Some in-laws can sabotage their child’s marriage by invading privacy, forcing them to choose sides, and overstepping boundaries.

Raising a child is a hard task, especially when they are at an age that requires constant attention and guidance. But unlike adults, toddlers and preschoolers can’t comprehend all forms of punishment, and the person caring for them has to be careful not to set bad examples. So one should restrain from being rude to children as it’s an ineffective technique and can misshape their character.