Meet Kefir, the giant Maine Coon cat who is an internet sensation 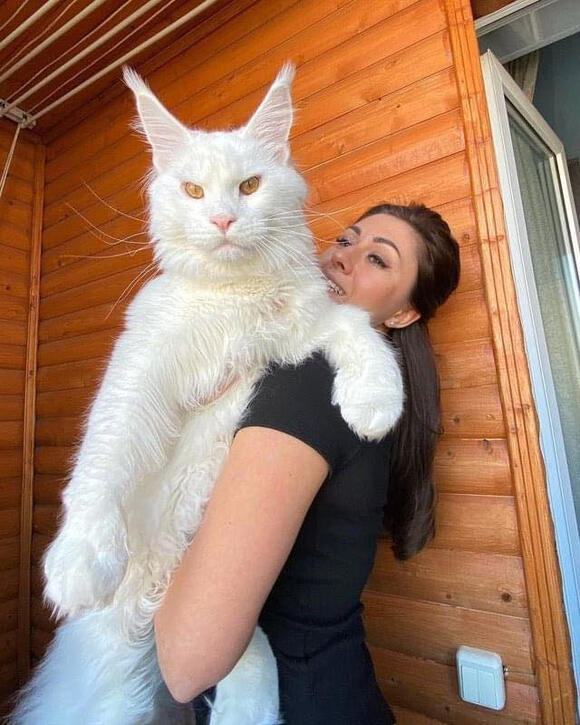 Kefir is a Maine Coon cat from Russia who took the internet by storm with his huge size. This adorable cat is a few months over two years old and hasn’t reached his maximum size yet, as Maine Coons usually grow till they are three years old.

Yulia Minina, his owner, confirmed this, “It’s normal for Maine Coons to keep growing up until they are three years old.” She also shared that Kefir is often mistaken for a dog by guests when they see him first.

Kefir lives in a small town, Stary Oskol, in Russia, along with Yulia. After being stunned by his gorgeous white fur, Yulia had bought Kefir from a cattery when he was a tiny kitten. She named him Kefir, after a dairy drink that resembles his snowy white fur.

"I could not even think that an ordinary baby can become so big. He not only grew up big in appearance, he is also very smart and always behaves calmly.”, Yulia shared with The Mirror.

According to her, she has faced only a few difficulties in raising him.

Kefir leaves wool around the house, which can be challenging to maintain.

And she also said that “He has one more habit: at night he likes to climb on me and sleep. When he was a kitten, it didn’t cause me any inconvenience. But now he has become big and heavy, and, of course, it is difficult to sleep like that."

“But in general, this is a super-smart cat. It weirdly can feel the general mood in the house. Kefir doesn’t meow, doesn’t yell, and doesn’t harm the furniture. A truly perfect cat.”, Yulia added.

It's imperative that parents treat their adopted and biological children equally. There are several ways to bond with adopted children so that they feel included in the family.

Woman furious at mother for missing her child's birth

Weddings are a once-in-a-lifetime event and hold a special place in the couple’s and their parent's hearts. Like weddings, the birth of a child in the immediate family is also a beautiful moment.

Woman refuses to let brother-in-law sleep beside her

Losing a spouse to death can make one emotionally vulnerable, depressed, and more. How long people will take to recover from this will vary from one person to another. During this time, they require their family’s and friends’ support.

Woman berates birthday boy by being 'brutally honest' for his likes

Impressing one’s partner’s parents can be a hard task, especially when they’re sensitive and take offense at silly matters. In case things are bad with them, one can always rectify their mistakes and apologize.

Mother forces teenager follow a religion of her choice

Forcing a religion on children can seem like a good option to parents. However, this can reduce their will to practice the religion and damage their outlook on that particular religion.

A person whose foremost priority is their partner will zealously protect the time they spend together. They will also value their partner’s opinion and ensure that they’re happy in the relationship.

Some experts say that white lies are to some extent normal and common in a relationship. But bigger lies are rare and can damage the relationship by eroding trust. Also, the partner who is lied to might feel like a fool for believing the lie.

Should one include a stepchild in their inheritance?. Stepchildren have no right over one’s wealth until they’re officially adopted. However, one can write a will listing the assets to their stepchild.

Raising teenagers to be good adults is a difficult task, especially due to their rebellious nature. One way to discipline them and discourage bad behavior is by preparing a list of consequences of their actions.

Man asks ex-wife for child support because she is rich

Basically, child support is the money that a parent gives the custodian parent to care for the child. Unfortunately, despite being a familiar term, the idea of child support is unclear to some people.

Having a child should be a couple’s unified decision and not the opinion of just one of the parents. Since a child is a great responsibility for the parents and can bring about a lot of change in their relationship and life, both parents must be willing to have a baby.

"Be careful. You'll get hurt in more ways than one" Man warns daughter's boyfriend

Anger issues can affect a person’s relationship in irreparable ways. It could cause undesirable drama, which could tire one’s partner and eventually end the relationship. Not the least, an anger outburst might escalate an argument over even silly differences, making it difficult to reconcile.

Post delivery is when the couple learns how to care for their baby and function as a family. During this time period, the mother needs to pay attention to her body for its smooth recovery.

"He had cancer, show some empathy" Man demands GF pay for his cancer-survivor friend

Cancer survivors face huge financial issues as they struggle to pay medical bills. The situation becomes more difficult when they can’t find a job. But is it right to expect others to pay for them because of their financial hardship?

Is one’s partner entitled to know all their secrets?. 44% percent of Americans keep their finances a secret from their partners due to privacy concerns and the desire to control their own finances.

If a tenant damages their house owner’s property, the latter can terminate the contract and serve the former an eviction notice. The tenant will most likely have to pay compensation for the damage.

PPD (postpartum depression) is a condition that affects a family and not the mother alone. Although there are many talks on PPD and motherhood, not many think about the baby and the other parent.

Should one come clean with their spouse after a night of infidelity?. Although disclosing one-time infidelity to one’s significant other reduces guilt, some experts suggest it's better kept under the wraps if they’re happy in their relationship.