Lay's could slowly cause cancer 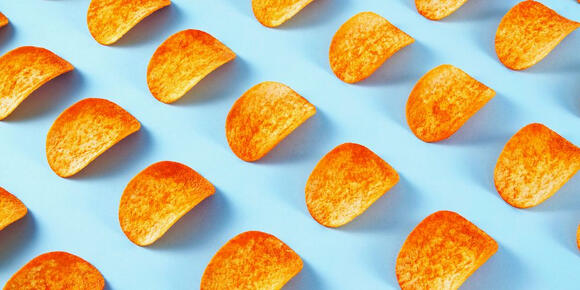 Lay’s (some may know it as Frito-Lay) is a famous potato chip brand known for its crispiness and rich potato flavor. The brand has other names as well. It’s called Walkers in UK and Ireland, Smith’s in Australia, Chitato Lite in Indonesia, and Hostess in Canada.

Although Lay’s claims to be healthy, many are concerned about how true that is. Rumors about its salt content, fried nature, and others have circulated often.

Are you also wondering whether Lay’s is healthy?

Let’s start by going through the nutrient composition of Lay’s Classic Original.

From the table, we can see that all nutrients in Lay’s are within the recommended daily limits. So, rumors that it has high fats and salts aren’t true.

In fact, Lay’s only contributes to 13% of the total fat a person can have in a day. That leaves enough room for more food with fat. Similarly, a bag of Lay’s contributes only a little amount of salt — 7% of the daily limit.

But it can't be called healthy - because of acrylamide generation.

Lay’s Has Acrylamide — a Cancerous Compound

Note: Acrylamide is found not only in Lay’s but also in other potato chips, cakes, french fries, and all fried or baked or roasted food.

Also, since the carcinogenic nature of acrylamide was discovered by conducting tests on mice in high doses, the FDA (Food and Drug Administration) hasn’t been able to deduce a limit for the compound.

Also, acrylamide can be formed in food because of the raw products, processing, or ingredients. That’s why it’s challenging to prevent its formation. Fortunately, it can be controlled.

The FDA developed several industrial guidelines for the manufacturers to mitigate acrylamide generation.

The guidelines include everything from the selection of raw materials to packaging. For more information regarding the guidelines, click here.

On the other hand, EFSA (European Food Safety Authority) has released acrylamide limits for different food. According to them, the amount of the compound shouldn’t exceed 750 μg per kg. Besides setting a limit, the organization has also given industries a few guidelines to reduce acrylamide formation in their products.

How much acrylamide does Lay’s have?

The last test the FDA conducted was in 2015. Here’s the list of acrylamide levels they obtained:

As per the test, the Lay’s Classic Potato Chips has 1410 ppb acrylamide, i.e., 1440 μg per kg — which is almost twice the limit prescribed by the EFSA.

You should also remember that Lay’s probably isn’t the only food that you have with acrylamide. The amount of acrylamide you consume in a day can plummet if you have bread, cake, or other plant-based food product.

But this doesn’t mean you shouldn’t have Lay’s.

The test on Lay’s was conducted in 2015, and the brand could have taken several measures to reduce the compound quantity in its product. However, we can’t assure that until more tests are conducted.

Think again before you have M&Ms

Mars and Murrie (M&M’s) is a multi-colored chocolate with a candy shell exterior holding together different fillings. A packet of M&M’s usually has candies of colors red, blue, yellow, green, orange, and brown.

Red Bull is an energy drink, a quick booster of mental and physical performance. The brand sold 7.9 billion cans worldwide in 2020 and makes up around 24.6 percent of the energy drinks market in the US. In fact, it generated a sales of over 1.3 billion US dollars in 2020.

Think twice before having Doritos

Doritos is a famous flavored tortilla chip produced since 1964 by Frito-Lay. Around 6.65 million consumers who purchased it bought more than eight packets in a month. Doritos is available in various flavors that are very close to the original. This astounding quality tempts people to have it more.

Reese's Peanut Butter Cups is a Hershey's chocolate candy product with peanut butter fill up. It's one of the most popular candies in America because of its contrasting salt and sugar flavors and rich texture. In 2021, Statista reported that over 15.93 million U.S consumers have five or more servings in 30 days.

Having too many KitKats is harmful

Kitkat is a popular chocolate-clad wafer snack with over 11.50 million consumers in the year 2020 in the USA. This chocolate wafer stick is owned by Hershey's in the USA and Nestle in other parts of the world. Here we'll discuss its ingredients and nutrient consumption and decide whether it's good for health.

Why you shouldn't have Honey Bunches of Oats (Granola Maple Pecan)

Oats is everyone's healthy and go-to breakfast. Popular among a sea of breakfast oats is Honey Bunches of Oats. It's so popular that 2.67 million Americans consumed around ten portions or more of the delicious cereal in 2020 alone.

Pringles could slowly kill you

Pringles — the name probably brings back the memory of the chip’s luscious flavors, mouth-watering aroma, and appetizing appearance. Since it's available in the market since 1968, many feel the snack was a part of their childhood.

The key to healthy beer drinking is moderation

Beer is one of the oldest drinks in the world, with its brewing dating back to 3500 to 3100 BCE. Once upon a time, this drink was believed to be safer than water because its preparation included boiling water. It was so popular that its recipes were found in Egyptian tombs, Mesopotamian archaeological sites, and Babylonian texts. So, it's no surprise that we carried the heritage and drink it regulary.

How the Coca-Cola Classic is injurious to health

It's well known that sugary beverages aren't healthy. But that hasn't held us back from drinking them. The USA ranked second in soft drinks consumption in 2019 according to Statista, with Coca-Cola being the most had carbonated beverage. In fact, Americans drink 399 servings of Coke products every year, 63% of those being Coca-Cola Classic.

In the present scenario, everyone wants to know whether you're vaccinated. Several hotels and restaurants only allow vaccinated individuals to access their services. And most countries mandate the Covid-19 vaccination certificate to permit entry.

High sugar consumption increases obesity, diabetes, blood pressure, heart and liver disease, and tooth decay. Despite these conditions, a person in the USA consumes about 20 teaspoons or 80 grams of sugar per day.

Cheese is a significant part of our lives. From cheese-filled croissants to cheesy pizzas, this dairy product breathes soul into twenty-first-century staple foods. But not all cheeses are healthy, keeping people from enjoying them. However, they are quite a few cheeses that can make you healthy.

Why The Texas Anti-Abortion Bill Should Go

Abortion is one of the most controversial topics of all time. Several countries have banned it on the grounds of ‘murder’, claiming that a fetus is a life. And few others advocate prohibiting abortion due to its risky nature.

How Did Kerala, A Small Indian State, Contain Nipah Infection To One Death

Nipah is a deadly virus with a fatality rate ranging between 40-75%. On 4th September 2021, a 12-year-old boy's samples were tested positive for Nipah in the Kozhikode district of Kerala - who later succumbed to the infection.

The Met Gala is the beast of all red carpet events, exploring the fashion world by letting celebrities adorn whimsical outfits. Over the years, there have been several instances where stars broke a few rules, setting the whole world talking. This year's highlights included Kim Kardashian's all-black outfit and Alexandria Ocasio-Cortez's 'Tax The Rich' message on the gown.

Global warming is a devastating phenomenon that's plaguing the entire world. One of the most visible effects of global warming is the increasing temperature. According to NASA, the latest average variation from the global temperature is 1.02 °C or 1.84 °F.

Nipah has re-emerged in Kerala after a year of killing a 12-year-old boy. Upon testing, 16 samples were found to be negative. Those tested negative will be under observation for three more days.

Control negative effects of working with a Computer

Staying healthy physically and emotionally is difficult when you work an 8-hour job on a computer five days a week. Working with computers daily strains eyes, weakens neck and back muscles, and damages wrist nerves. Fortunately, you can tackle these by taking appropriate simple steps.

Nipah virus is a zootonic virus, i.e., it infects both animals and humans. The virus primarily causes asymptomatic infection to acute respiratory infection and fatal encephalitis. Fruit bats and pigs are the common hosts of the virus.